Home » Everything » Moving into our new motorhome »

Moving into our new motorhome

Moving day! Today we gave up our apartment and moved into our motorhome full-time. Spoiler: it was a long day but we did it!

Two days ago, we picked up our new motorhome and, due to time constraints, ended up leaving her in Mortsel. We originally wanted to have time to test out life with Amelia before we went full-time, but ran out of time. It was hard to leave Amelia on the street in Mortsel but we knew she would be safe. 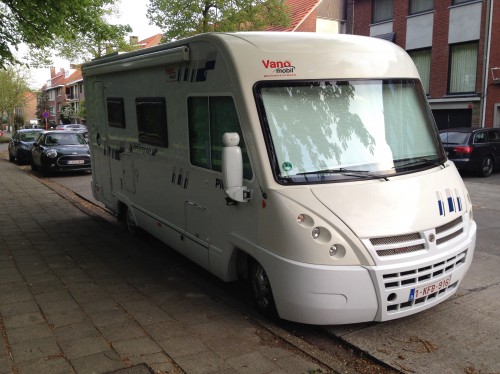 Amelia waiting patiently for us to start our trip.

This morning, at 6am, I returned to Mortsel to drive Amelia down to Brussels. She was covered in flower blossoms from the tree above (first tip: watch out what you park under!) but no other issues. Jon, an early riser, met me outside and we had a quick cup of coffee before I headed to Watermael-Boitsfort.

Normally, when moving, you’d move all your stuff out a few days before the end of the lease giving you time to clean. Not us. Our day was spent moving all our remaining items out of the apartment, cleaning, and loading up the motorhome.

While I was driving the motorhome to Watermael-Boitsfort, Alison was cleaning our apartment. After seven years, there was plenty to clean. Fortunately she had already started some of the cleaning so her focus was on the rooms we couldn’t clean until the last minute.

Arriving in Watermael-Boitsfort, I parked Amelia along the busy Boulevard du Souverain. We decided to park here because it was near our friends, Amy and Mathieu, it was easy to get to in a motorhome, had lots of parking so we could make runs with a car, and it was relatively close to a metro station. I left Amelia just after 9am and headed back to our apartment by metro.

The rest of the day was a blur. In a nutshell:

There were lots of other things that happened through out the day (e.g. forgetting to remove the litter boxes from the house only to have the inspector find them) but we managed to get through the day. In the end, we had about 3.5 car loads of stuff which we hauled out of the apartment and which Alison magically fit into Amelia. It was incredible just how much stuff we got in there! 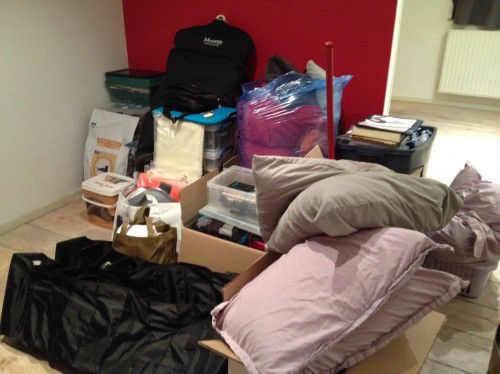 Only some of the stuff we carried to the motorhome and Alison squeezed in.

Now in the motorhome, Alison and I (mainly Alison) packed away the last few things. We discovered the gas system didn’t work meaning we had no heat, hot water, or cold fridge. I sent a quick note to Frank at Vanomobil who told us to try filling the tanks and see if that helped.

Amy and Mathieu stopped by after they had dinner. I am sure we looked ragged after such a busy day. We donated a few more things to them and their friend Samuel. (All we had left were two dozen bottles of Jurancon Doux; I hope his wife enjoys them!) It was great to have support from Amy and Mathieu throughout the day. They really pitched in, taking a load of our stuff in their car, bringing us food, and just being great people. We are sad to be leaving them.

After our friends left, we made the bed and went to sleep. Lots of traffic on Boulevard du Souverain, making the motorhome shake every time a car passed. The trucks and buses made it feel like we were in a boat. It would be a long night but ear plugs helped block out the street noise. 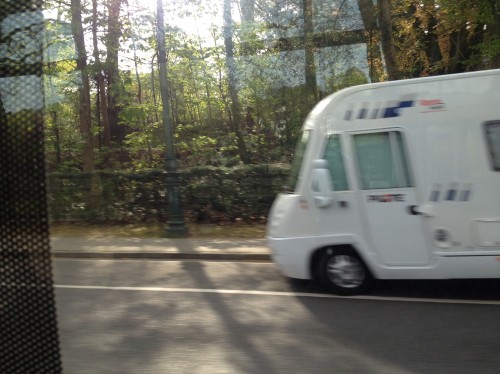 Rushing past Amelia on the Boulevard du Souverain on our way to go get the first load of stuff.

We did it. We moved from 100 square metres to 15 square meters. Holy crap! We’re living in a motorhome. Everything else is gone. There is no backing out now. The feeling is hard to explain. We’re excited and terrified at the same time, our stomach’s doing back flips when we think about.

What have we done?