Home » Everything » Starting a New Full-Time Motorhome Adventure in Canada »

After a two-year hiatus, we return to full-time motorhome living in Canada in a Bigfoot RV.

Just over two years ago, we left our home in Brussels to embark on a new phase of our lives – living on the road full-time in an RV. Our journey had lasted only three months before our lives shifted in a way we never anticipated. On a scheduled visit home to Canada, we learned of my father’s terminal cancer diagnosis. (You can read the full story here.) We had a year with my dad before he passed away and we spent another year with my mother helping sort through Dad’s affairs while working from New Brunswick.

Yesterday, we embarked on yet another new phase of our lives. We left my mom’s house in Saint John, to spend three months slow travelling through northern New Brunswick and, primarily, Quebec. We have few plans other than starting by circling the Gaspé Peninsula and eventually heading north to the Saguenay region. Neither of us has explored Quebec beyond Montreal, Quebec City, and a few quick trips to Thetford Mines to buy our motorhome. 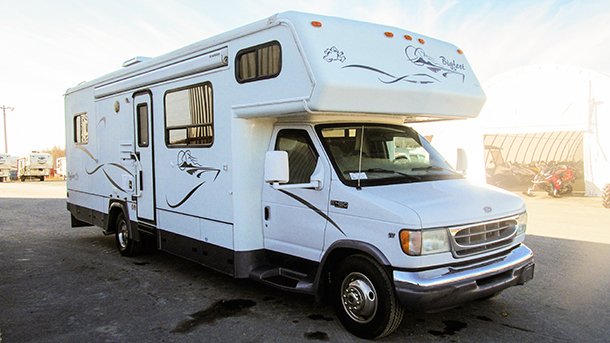 The motorhome itself is completely different from our European ride. In France we had a 21-foot Class A; now we’re driving a 30-foot Class C. The brand is Bigfoot, so we named her Yeti, and she was built here in Canada. As a 2002, she’s older than our European ride too. She has a large slide-out which gives us quite a bit of extra space in our living room and kitchen areas. We’ve done a lot of work to Yeti over the past few months. Andrew completely redid the electrical system to install two large solar panels on the roof, which he’ll write more about in a future post. We’ve replaced the faucets and many of the light fixtures and changed all the bulbs to LEDs to conserve energy. Yesterday was the first real test of the new system, and it worked like a charm. But let me back up.

We left Saint John around noon (with full intentions of leaving sooner being waylaid by Andrew remembering he had to cut some metal to mount our mobile antenna; not having the tools to do so on the road.) We made our traditional lunch stop at Pita Pit and grabbed one last Starbucks for the road. 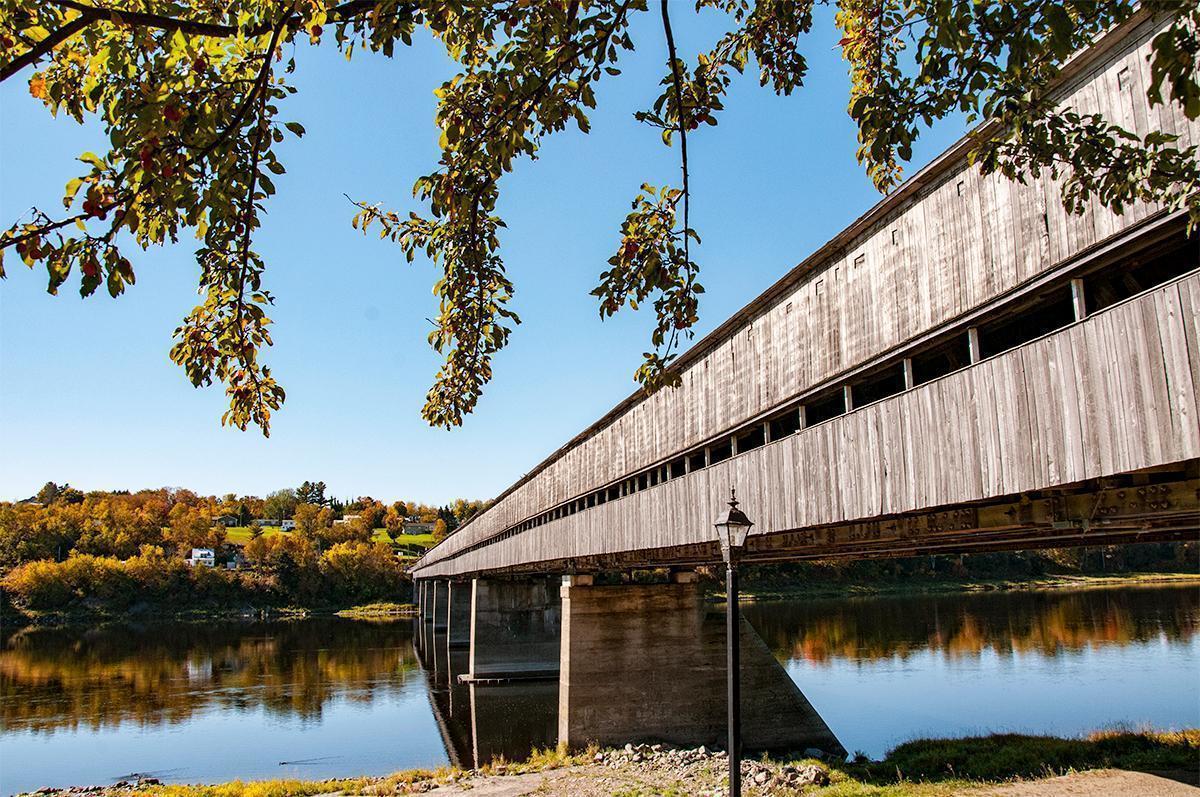 Hartland is famous for having the World’s Longest Covered Bridge.

We drove straight through to Hartland where we had a quick fuel stop and then continued to Perth-Andover where we finally left the highway, and our actual slow travel journey began. From here we were following the Appalachian Range Route, an entirely new drive for both of us. After passing through town, we almost immediately started climbing and could see the mountains stretching out before us.

The route follows alongside the Tobique River, and the scenery is lovely. The area is very rural with a diverse mix of properties from tarpaper shacks to gorgeous log homes beside the river. We continued until Plaster Rock, home of the World Pond Hockey Championships and the World’s Largest Fiddlehead statue. We stopped for the requisite cheesy fiddlehead photos and a last email check before we lost our mobile signal altogether. Then we headed on into the mountains. 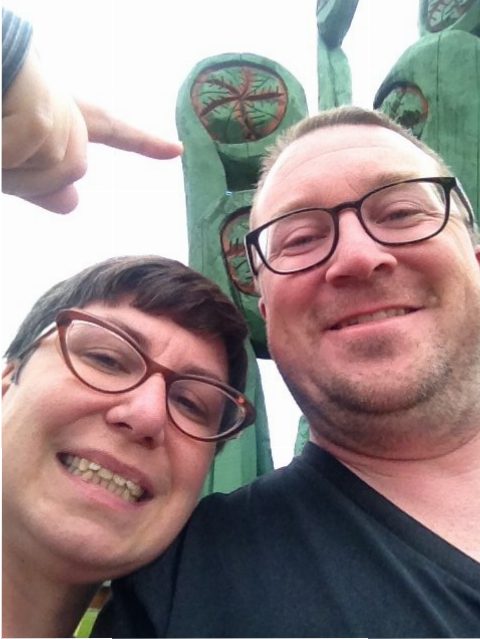 From Plaster Rock, civilisation is sparse and wildlife is more abundant. We saw groundhogs and deer and, just before arriving at the park gate, we saw two moose. One was having a drink from a brook right beside the road. For the past two years, Andrew has sworn the moose in New Brunswick are fictitious, despite all of us natives telling him otherwise. Since being back, I’ve only spotted one when he wasn’t with me, so it was great to see two on our first day out.

Not long after the moose sighting, we arrived at Mt. Carleton Provincial Park where we are spending four nights. Arriving at the gatehouse, Andrew noted the distinct lack of power lines – which explains why there are no hookups available at the campground. Inside the small visitors’ centre, we were greeted warmly in French and English. We continued in French and were immediately asked where our accents were from. We explained we had lived in Belgium for 11 years and were told our accents were ‘cute.’ (In Belgium and France we were often told our French Canadian accents were cute.) Meanwhile, I was smiling internally at their uniquely northern NB ‘Franglais’ which is comfortingly familiar to me from my junior high school French immersion days.

After checking in, we headed to the park headquarters as it’s the only place to get wifi. Andrew needed to double-check on a client issue before going completely offline. Then we headed to the campground. It was opening day, and there are only about half a dozen RVs here – all of the others are Francophone New Brunswickers who came here together to fish for trout.

Our site (29) is very sloped, so it took some jigging to get level, but we eventually parked, chatted with the neighbours, and set up the BBQ for a dinner of sausages and mom’s potato salad.

With no electricity, we were worried we’d have a cold night, but our furnace kept running off the solar power charged batteries all night. When Andrew got up in the morning to turn it off; we were still at 96% charge. This is great news for our ability to boondock in the future. In keeping with the Canadian theme, our batteries are slightly used Zamboni batteries. Maybe we should buy Yeti a toque!

This morning we took our time getting up and moving as we’ve had about a month of non-stop work to get the motorhome ready to go. The kitties made out very well yesterday too but are enjoying some power naps today as they were awake all during the drive yesterday. The weather is quite cold and grey, and we’ve had a bit of rain, so we’re not feeling too guilty about staying put. Hopefully tomorrow we’ll be able to get out for a bit of a hike.

Orange navigates us to our first camping spot at Mount Carleton Provincial Park on the Appalachian Range Route. #ExploreNB #ExploreCanada

As a side note, we still have all of Andrew’s journals from our France trip which we will continue to edit and add to the appropriate dates in the past as we have time. You can always read about more of our previous travel adventures on our primary site, CheeseWeb.

Writer and Photographer at CheeseWeb.eu
Alison Cornford-Matheson is a freelance writer and travel photographer. In 2005, she landed in Belgium where she founded CheeseWeb.eu a travel resource for slow travel in Europe and beyond. She dreams of the open road and exploring Europe’s hidden secrets in her motorhome, Amelia, with her husband, Andrew, and her spoiled house-cats. She can often be found with a Nikon, a good book and a glass of red wine within reach. You can also follow her on Google+ and @Acornn on Twitter.

Latest posts by Alison (see all)

Reflections on motorhome living after 90 days on the road