Home » Everything » The Day We Picked Up Our New Motorhome, Amelia »

The Day We Picked Up Our New Motorhome, Amelia

Today we finally picked up our new (to us) motorhome, Amelia. We are very excited to have our new home, but, as you’ll see below, the day was a packed one.

It took us a while to get the motorhome registered and insured, but once that was complete the only thing left to do was to bring our new home … err… home. Since today’s pick up date is so close to our apartment exit, the day was packed with a million things. As usual somethings went smoothly, other things not so much.

The morning started with our good friend and wonderful videographer, Jon, travelling down to Brussels to meet us. Jon is creating a short video to kick off our adventure and this morning he wanted to shoot a some video about how we are feeling. (* see note at end)

When Jon arrived, around 10:30am, we decide to first take care of getting an ‘Addresse de Reference’ or ‘Referentieadres‘. Since we will be traveling in Europe, we still need an official address in Belgium for insurance, taxes, and so on. The idea of a reference address is that someone (or a particular social institution) takes on the responsibility for ensuring your mail is forwarded. Jon, and his housemates, had very kindly agreed to help us out in this regard.

Together with Jon, Alison and I first went to the desk of the État Civile at our local commune in Saint-Josse-ten-Noode. After waiting 15-20 minutes we were buzzed in to the office where we found out we needed to go to the population desks. At the population desk, we were told to go to the address change desk at the far end of the hall. It started to feel a lot like the 12 Tasks of Asterix (see the video at the end of my article about applying for Belgian citizenship)!

The man at the Address Change desk had no idea how to apply for an “Adresse de Reference”. He spoke a colleague and came back he told us we would first need to be removed from the system. Not just marked as ‘gone’ but completely removed. And it would take 6 months! We quickly pointed out that this was not our understanding of the process. He conferred again with colleagues but came back with the same answer. Then we asked about a temporary absence and a light went on. Aha! Yes, he could declare us ‘temporarily absent,’ but we’d have to come back every year to renew. Not great, but whatever works.

The guy at the address change desk went again to confer with his colleagues about the temporary absence process. Upon his return he told us his colleagues had found an exception in the laws about the reference address which seemed to allow for a ‘tour du monde’. So now we were back on the “Addresse de Reference” track (which, unlike the temporary absence, doesn’t need to be renewed). Great!

We handed over our residence cards and he started the process. A few minutes later he went to confer again with his colleague.  Shortly he returned to tell us he couldn’t make the changes as we had to visit the commune of our new address (ie. Jon’s commune of Mortsel). Sigh.

By this point, our friend and fabulous photographer, Amy, joined us. Together we headed off to get some food. On the way I visited ING to deposit money, cancel our house insurance, change our mailing address, and get a form for closing our blocked account. Finally, we did shoot some video with Jon while scarfing our food. Not sure how high quality it was!

An hour late for our meeting at Vanomobil, we piled into Jon’s car and headed to Hoogstraten. We shot a couple of videos going into the dealer and while Frank, the sales manager at Vanomobil Hoogstraten, showed us the ins and outs of our new home. He showed us how to empty or fill the various tanks, how to use the fridge and stove, how the heater worked, some basic information about the engine, and more. There were a lot of small things to remember but we hope we will retain most of it! 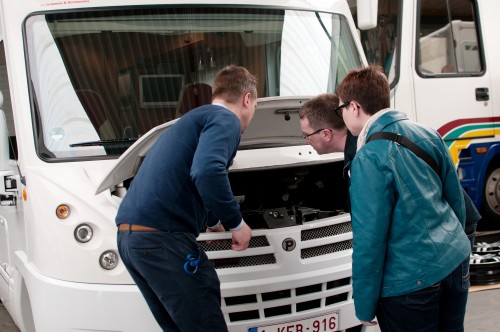 Frank from Vanomobil shows us how to check the oil. (© Belalumo Photography)

One issue we discovered during the handover was Vanomobil had not removed the satellite dish and TV as requested. Once Frank understood we really didn’t want it, his technicians jumped on it and dismantled it. We also discovered the toilet didn’t work which required the technician to make another repair. All-in-all we were in Hoogstraten for about 2 hours.

After the fiasco at the commune in Saint-Josse, we decided to try the commune in Mortsel commune that evening. We were cutting it close because we needed to be back in Brussels by 7pm for a furniture pick up, but this was really our best shot at getting this sorted out. We followed Jon to his place in Mortsel, parked the motorhome, and walked over to the commune. 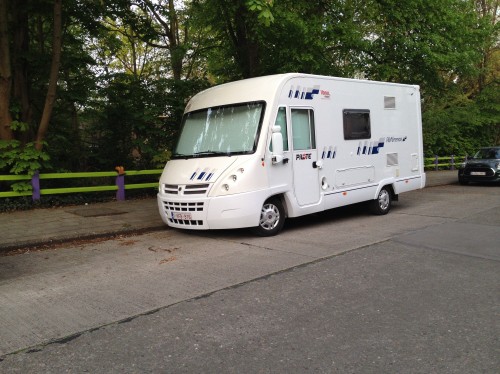 Amelia parked on the street in Mortsel.

Arriving at the commune reception desk, we explained our situation to the woman at the front desk. She then called in a more senior staff member to help. It seemed like we were back to the same situation: No, we could not get a reference address because we weren’t homeless; we should go back to St. Josse commune; etc. Eventually we sat down with a woman named Ellen who pulled out the rules and reviewed them with us. She wasn’t sure it would work. In her opinion we didn’t really fit into any particular scenario that she could find and she couldn’t really understand the ‘tour du monde’ exception.

Eventually she decided to proceed with a reference address anyway. One last wrinkle: Jon couldn’t sign the paperwork as he was not considered the head of household, that was one of his housemates. Ellen very kindly told us to get it signed and bring the form back the next day. She would finalize the paperwork in the meantime. Thank you, Ellen!

Our address sorted, we looked at the clock. It was now closing on 6pm and we needed to get back to Brussels by 7pm. Since it was rush hour we decided the safest bet was to leave the motorhome where it was and take the train. So Amy, Alison and I waved Jon off and settled in to wait for the train.

We were late back in Brussels, but we were able to connect with the people picking up the furniture and sent it off to a new home. By the end of the day we had achieved a lot: banking sorted, address sorted, and picked up the motorhome. But boy were we exhausted at the end of the day!

And now we have our new home! Yes, she is parked in Mortsel (near Antwerp), but we have the keys and we are now the proud owners of a motorhome!

The dream is real. 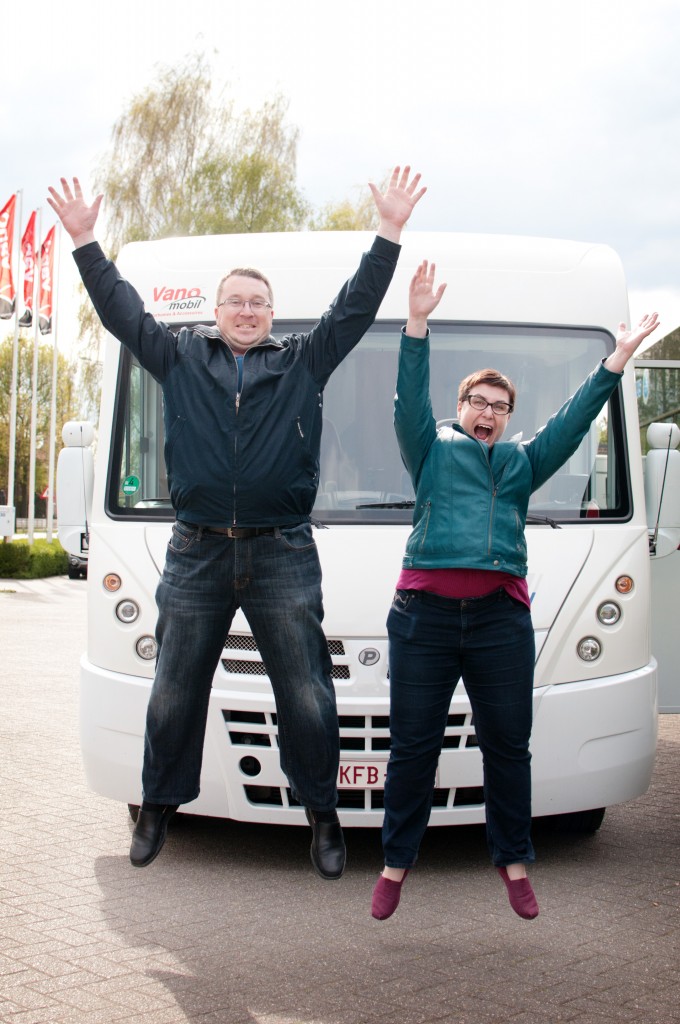 The Motorhome is Ours! (© Belalumo Photography)

*So how are we feeling? At this point we are both exhausted. We’ve been pushing to get our stuff sold and out of the house, so we are both physically tired. On the upside though we are almost finished with the apartment and we have picked up our new home. So it is exhaustion tinged with excitement loaded up with disbelief that we’ve gotten this far. Below is a video we recorded a few days ago when we had only 11 sleeps to go…