Today was the day. THE day. The day we had been planning for the last two years. D-Day. We were leaving Brussels in our motorhome, bound for the open road. Darn we were excited! 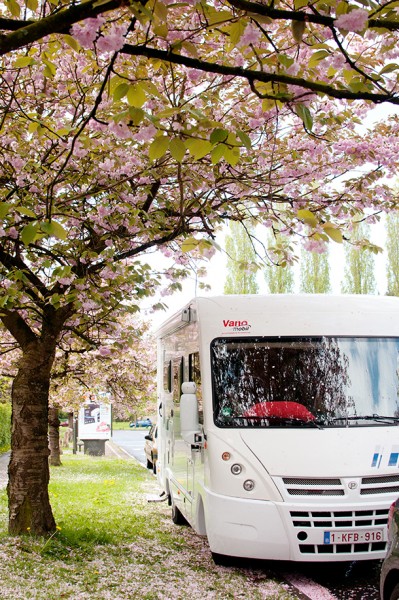 Amelia is parked on a lovely but not so quiet road in Watermael-Boitsfort. (Thanks to the incredible Bela Lumo Photography for the great photos of Amelia!)

After a not-so-quiet night sleeping on the side of the road in Watermael-Boitsfort, we awoke to a very cold machine. Since our LPG system wasn’t really working we had no heat. Best way to get heat was to start moving. First order of business was to fill Amelia’s diesel and LPG tanks. 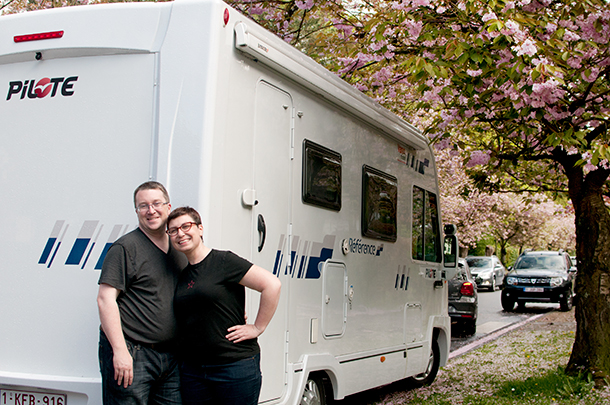 Amelia is packed and we are ready to hit the road!

We shoved the cats into their collapsible carriers and drove down the Shell just off Hermann Debroux. Fueled up we headed down the E411 to a petrol station which stocked LPG. Being a more volatile gas, LPG stations are typically outside cities so it requires a bit of research to find the nearest one. A quick search on our phones told us about this station on the E411.

Filling an LPG tank is different and I had some trouble filling ours at a self-serve LPG pump. I connected the nozzle without a problem, but I couldn’t figure out how to get the machine to starting pumping. After reinserting, pulling the nozzle, and looking completely confused, I decided to go back to the pump to see if there were any instructions. Aha! Turns out you have to hold down a big green button in order for the machine to pump! With that sorted, I filled the LPG tanks. Also, the gas started working. Maybe it had to do with Butane* being the main component?

(*Side note: My understanding is Butane is used in the summer but below 6C Butane doesn’t burn. So in winter Propane is used instead. Since the temperature this morning was so cool, maybe there was Butane in the tank thereby preventing the furnace from working.)

Fuel tanks full, we drove back to Watermael-Boitsfort and parked near our friend’s Amy & Mathieu. The street was beautiful, lined by trees brimming with pink flowers. But suddenly we discovered the toilet flush didn’t work. It worked ok when we picked it up. We called Frank at Vanomobil and he said to check the fuses which were all ok. We decided to head back to Hoogstraten to get it sorted after I ran some errands in town.

The last items on our list before we could get going were to unblock the funds in our bank account, cancel our Cambio car subscription, return our Numericable cable box, dump the Belgacom box for recycling, and pick up a few other odds and ends. I grabbed the metro from Hermann Debroux while Alison looked after Amelia and the cats.

While I was out, Frank called back and asked if we had tried running the toilet when the light switches were turned on. I forwarded the message to Alison who gave it a try. Eureka! It worked and we didn’t have to drive back to Hoogstraten. Why do the lights have to be on to flush the toilet? No idea. Maybe it has to do with the alignment of the sun or moon? Regardless, the toilet flush worked and we could hit the road. 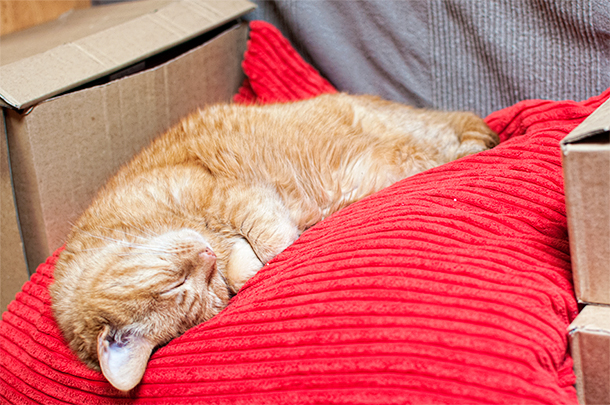 Orange is glad to have a break from driving 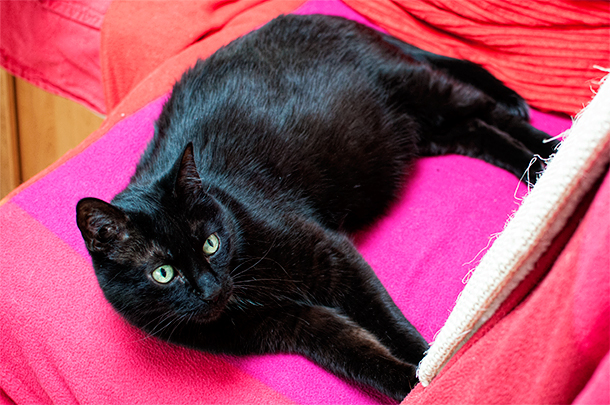 Buddy is not sure about this whole motorhome living idea…

A couple hours later, I finally made it back to Amelia. Although it was already mid-afternoon, we decided to push on as scheduled and go to France. We had butterflies in our bellies as we put Amelia in gear and drove out of Brussels… straight into a traffic jam and road construction. D’oh! 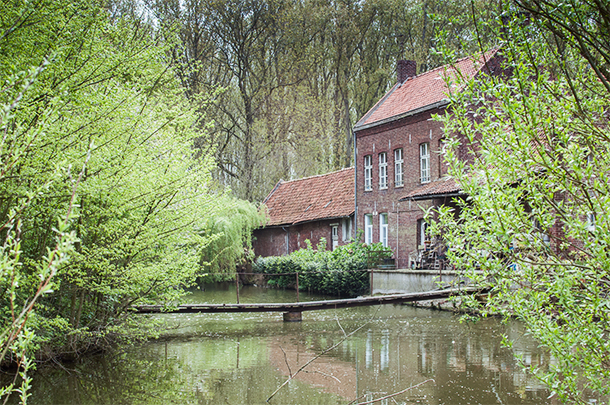 We took our time making our way through the construction, made a quick stop at a gas station for a snack, and a few hours later we were pulling into La Ferme des Anneaux outside of Lille. This was it. Our first attempt to stay somewhere foreign in our motorhome. It was also our first France Passion stay. We were excited and nervous. Would we like it? Would it be hard? How would the farmers receive us? Would they think we’re weird for staying on the farm? 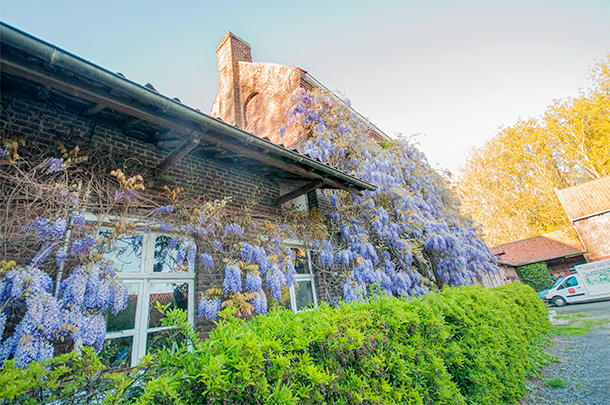 Arriving at the farm, we followed the marked route to the France Passion designated parking area. There we spotted three other motorhomes already parked for the night. Although there was place for up to 5 motorhomes here, we got a bit of help from the other motorhomers to park as it was a tight fit. 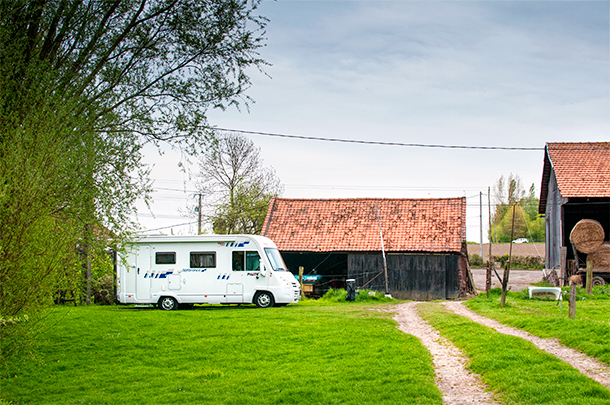 Our lovely and quiet home of the night

Ferme des Anneaux is a cute fortified farm surrounded by a water filled moat. Our parking spot for the night was just outside the water filled moat looking out over an orchard. Once parked, we wandered towards the farm to check things out. Along the way we were greeted by the owner who walked us into the courtyard and steered us towards their small shop. We took a look at their products for sale and bought yoghurt, milk, butter, and Lemonade (€7.15). Breakfast sorted! 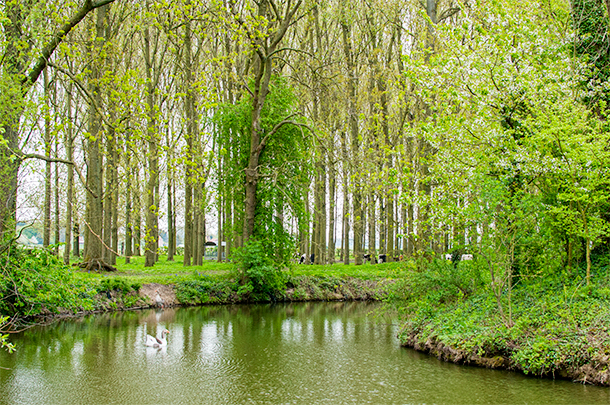 Happy cows grazing in the forest beside the moat 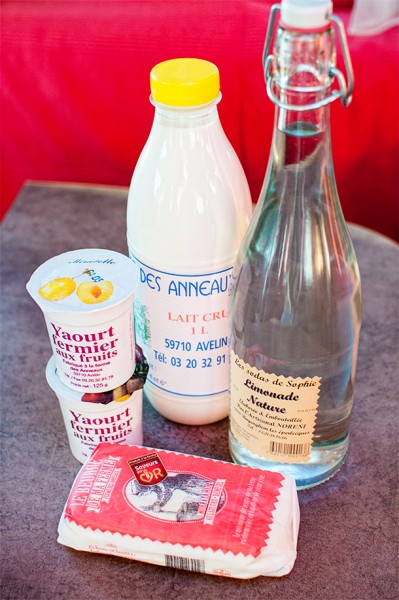 Back in Amelia we popped the top on a bottle of bubbly we’d been holding onto for just this moment. We were on the road. We had achieved our dream. It was real. Really really real. 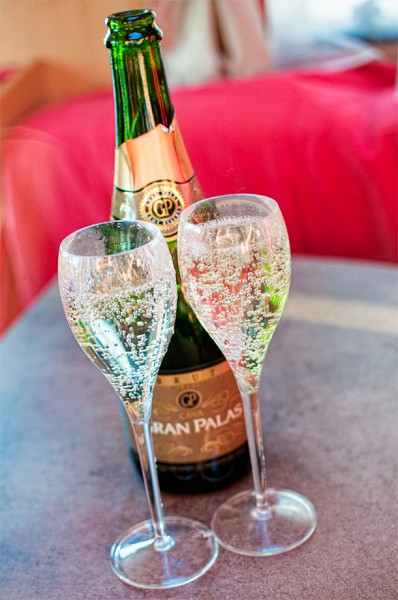 Here’s to achieving our dream of life on the road!

PS – Check out the following video of us heading out on the road. Let’s just say there were a few ‘bumps’ in the road!