A long day of driving our motorhome through Normandy, France, and lots of poultry at our France Passion farm stay.

The night was relatively peaceful until the rooster woke us up calling to a neighbouring rooster. We got back to sleep for a bit, but we were still up early. Fortunately, today is a driving day, and we planned to leave early anyway! 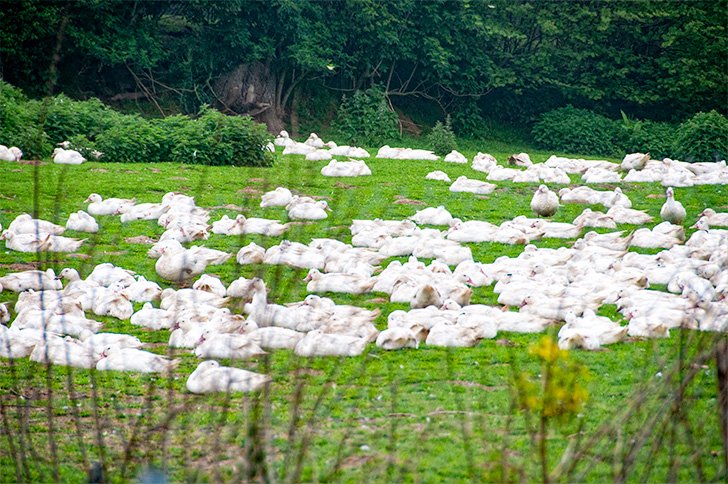 Before we hit the road, we decided to take a look at the ducks (and ducklings). Through a gap in the hedge, we spotted the young ducks, still with their yellow plumage. While Alison was shooting pictures, a Pine Martin (I think) bounced across the road. He bounced back and forth from the hedge to the road a few times while Alison tried to get a photo. He was pretty quick, though. 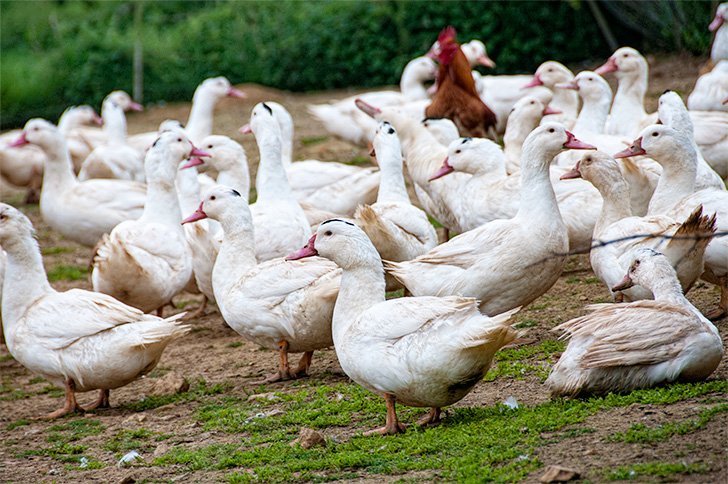 Hmm, was that the rooster that woke us up so early?

We moved up the road a bit and pulled Amelia over to the side so we could walk around. Up on the hills above the farm, you could see the hundreds of white bodies wandering around or just sitting amongst the green grass. In several fields around the farm, there are hundreds of ducks. We were able to walk right up to the fence without any issues. It was amazing to see that many ducks in one spot. They looked happy, and despite their numbers, they had lots of room to move around. They weren’t living in any sort of cesspit… they were well looked after.

Arriving back at Amelia, the cats had discovered a herd of curious cows who had approached our camping car from the passenger side. Orange’s tail was as big as it ever gets and Buddy was particularly curious. It was a very funny standoff. It took Orange a little while to calm down and stop thinking cows were out to get her. Cows are evil! 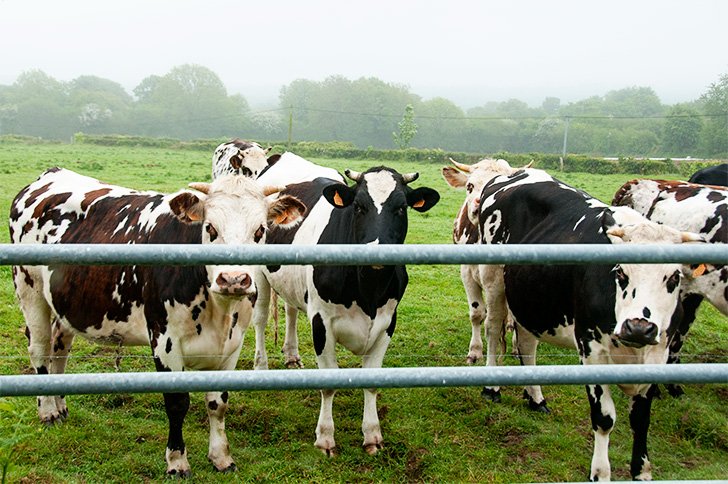 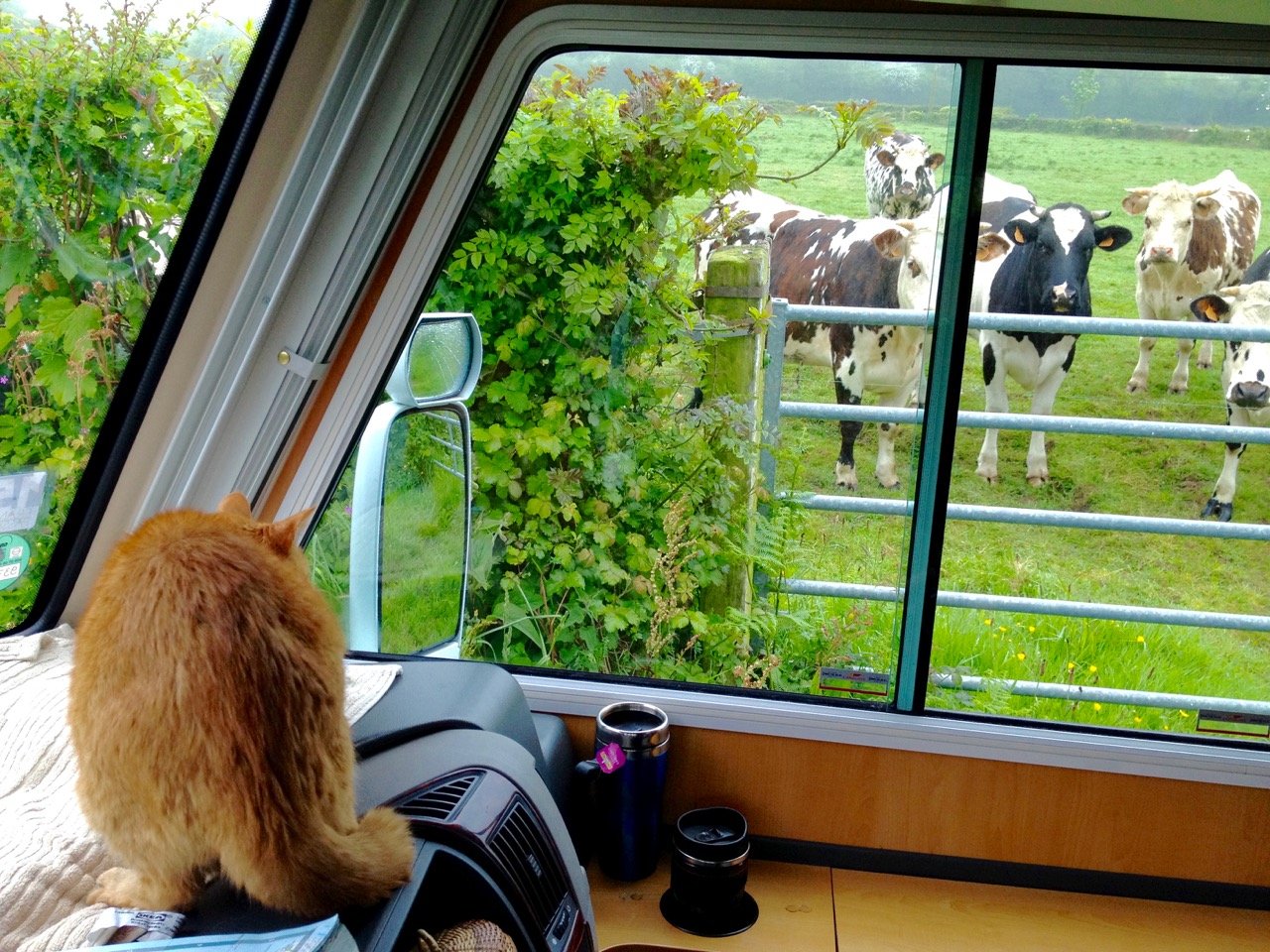 For our route to our France Passion stay today, we decided to take a direct route avoiding the highways. Of course, the highways would take less time (and probably less fuel), but we still wanted to see something of the countryside. We drove down the western side of the Cotentin Peninsula and then across through Alencon to Villaines la Carelle. The countryside was beautiful, and we’re thankful we decided to avoid the highways.

It was good to be moving, but it was a long day of driving (270km) which is kind of counter to our stated intention of slow travel. In fact, the way we’ve been travelling so far is somewhat in contradiction to our motto. We’ve put almost 3000km on the machine in just over two weeks. Of course, 700kms was to go back to Belgium, but that’s still a lot of driving, averaging 145km per day so far. Hopefully, this average will come down over the next weeks as we stay a bit more local. France is a lot larger than you might expect when looking at a map!

We had no major incidents en route. We stopped at an aire behind a church in a small town to dump our tanks and refill water. Unfortunately, the coin machine at the aire just ate our money, but at least we were able to dump our grey tank. 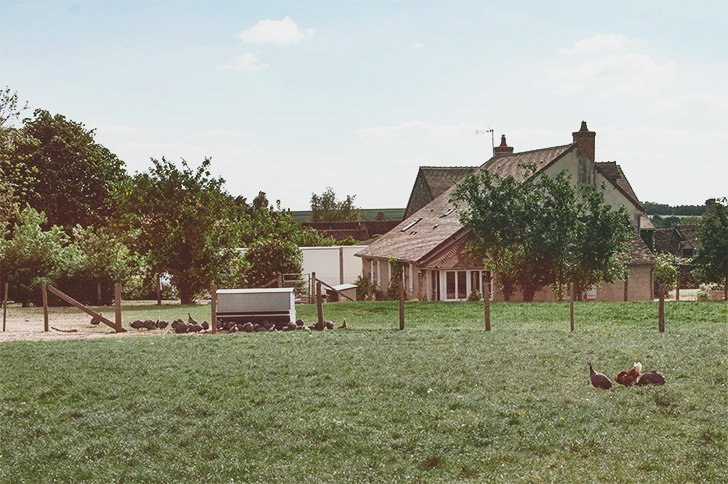 The view from our motorhome window at Volailles Fermieres, our France Passion stay

We arrived in Villaines la Carelle and made our way to our France Passion farm stay at Volailles Fermieres. After arriving at the farm, we had a nice chat with the lady who runs the poultry side of the farm. She told us for 12 years they ran an industrialised poultry farm, but ten years ago they decided to switch to free range, small-scale farming. They have about 400 birds now, including ducks, guinea fowl, and chickens. 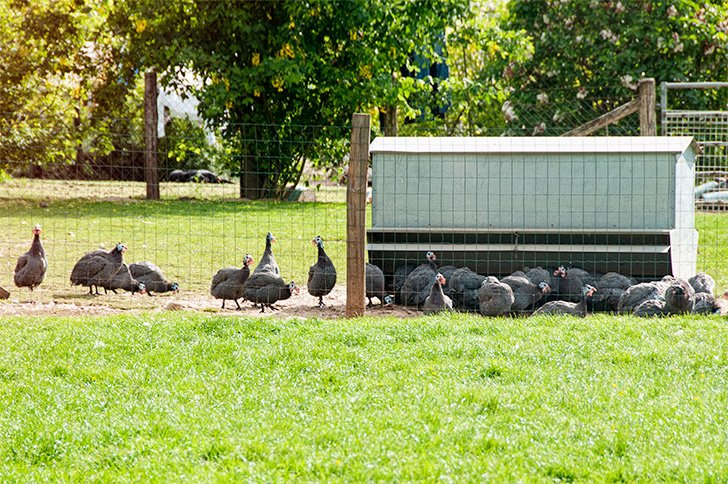 Taking a short look at the farm, it is clear the birds have a good life. They are in grassy enclosures with lots of space to move around and green grass to enjoy. There are no birds looking battered, unhealthy, or underfed. It is easy to justify spending the money on this sort of product when you compare the conditions to factory-farmed poultry.

After meeting with the owner, we spent some time watching the silly guinea fowl run around right in front of our overnight parking spot. They were amusing and seemed quite interested in what everyone else was doing. One would run in a direction and the rest would all chase after; back and forth through the field. The cats were fascinated by watching these silly birds run around the field. 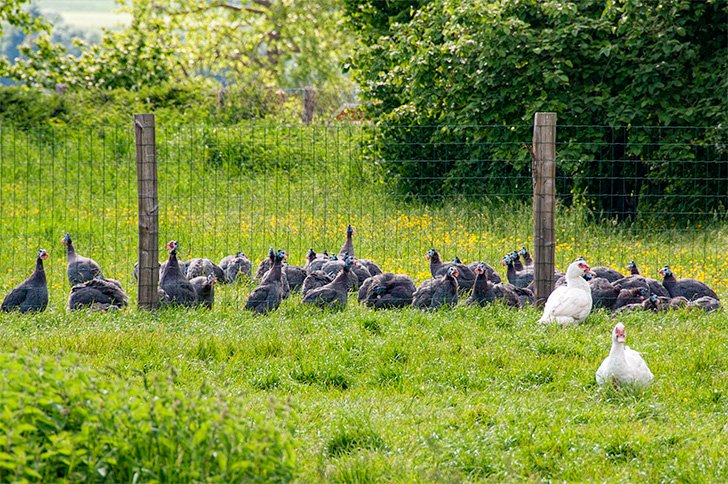 While the cats were entertained, we reheated the potatoes and guinea fowl leftovers and ate while watching the guinea fowl chase each other around the field. The circle of life, eh?

We closed the night by watching some shows on our computer and drinking some wine. We’re expecting a quiet night (once the guinea fowl calm down) but another early morning.