Home » Everything » Day 12 – Montormel Memorial, Camembert, and a cheese tour »

A visit to the Montormel WWII Memorial, a photo opp in Camembert, and a tour of the Graindorge cheese factory. Day 12 was a busy day in Normandy, France.

Orange seems to have a bit of a headcold. She started sneezing last night and looks a bit stuffed up still today. Perhaps a bit of hayfever? Do cats even get hayfever? She is powering through it, though. She is committed to her naps!

This morning we had three goals: visit the Montormel Memorial, get Alison’s photo in front of the Camembert sign, and visit the Graindorge cheese factory in Livarot. But first we must acquire our daily provisions! We popped into the farm’s boutique and stocked up on eggs, Camembert, and some apple juice. Total cost: 9.75€.

All stocked up, we set off for the Montormel Memorial with only a couple of doubts on the path. The Orne countryside is really pretty and woodsy. Great drives through tree tunnels and along some narrow roads. It was a bright sunny day with no major issues with the machine or the drive. Couldn’t ask for more! 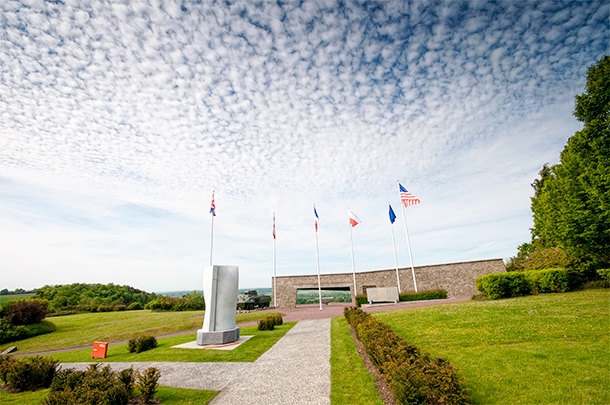 We were the first to arrive at the Montormel Memorial so we parked as close to the entrance as possible in a 21ft (6.5m) motorhome. The memorial is a tribute to the closing of the Falaise-Chambois gap in August 1944. When the Americans broke out of Normandy and started their drive east, they created an opportunity to encircle the German divisions attacking the Allied beaches. The Canadian and Polish Armoured Divisions were sent south to close the gap from Falaise to Chambois, where they would meet the Americans. Montormel is where the Polish Armoured Division cut off the final escape route for the German army and defended themselves heroically against numerous counterattacks until the Canadians could get to them the following day. 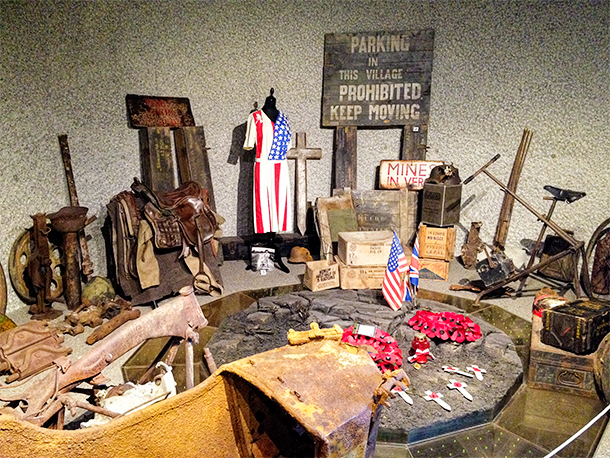 Inside the Montormel Museum, Normandy, France

I am sure I’ve read about the Battle of the Falaise Gap, but when researching WWII sites in Normandy for this trip, I saw this memorial and thought, “I know nothing about the Battle of the Falaise Gap.” The Montormel Memorial contains a museum and a video/map projection which does a great job explaining what happened and why the location was significant. The Germans lost 10k killed/wounded and 40k captured. An estimated 50k made it through this gap before the Polish pushed the gate closed. Seeing the peaceful valley below the memorial, it is hard to imagine the scale of the wreckage which littered the area after the battle. One of the memorial’s guides told us it took 20 years to recover all of the scrap metal from the valley. Twenty years! And even then, in 2003, a tank was pulled out of the river. It is impossible to imagine just how much equipment was destroyed or abandoned in that last rush to get out of the pocket. Read more about the Montormel Memorial and other WWII sites in Normandy on CheeseWeb.

Upon exiting the memorial’s museum, I saw the location is part of a larger route through the region, including walking/cycling paths and information posted along the way. This route takes visitors down into the valley to see some of the other key points in the battle, including the bridges at St. Lambert and the fording point near Chambois. As a Canadian, I would like to go back to see if there are traces of the Canadian Armoured Division still in the area.

After a quick lunch in the Montormel Memorial parking lot, we pushed on to Camembert. Camembert itself is tiny but there is a small museum dedicated to the cheese. Alison read that the museum is owned by the big mass producer, President, and that it wasn’t that interesting. So we just took a photo or two with Alison and the Camembert sign. Visit Camembert: check! Off to Livarot. 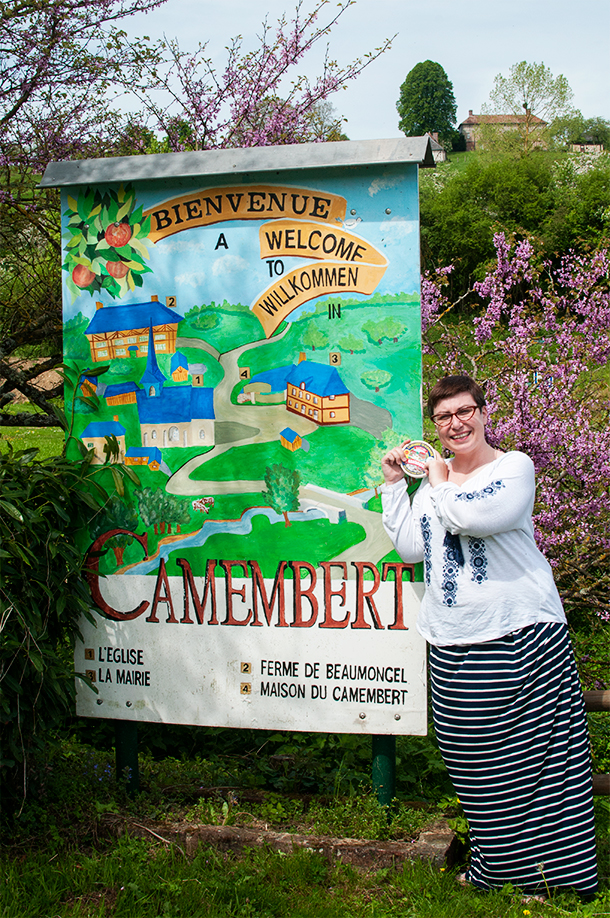 Getting Cheesy in Camembert, France

Livarot is where the Graindorge cheese factory is located. Hundreds of milk producers contribute their milk to Graindorge who is then responsible for making the cheese. It is a bit like a cooperative except I think the milk producers are paid just for their milk and don’t earn anything based on the sales. 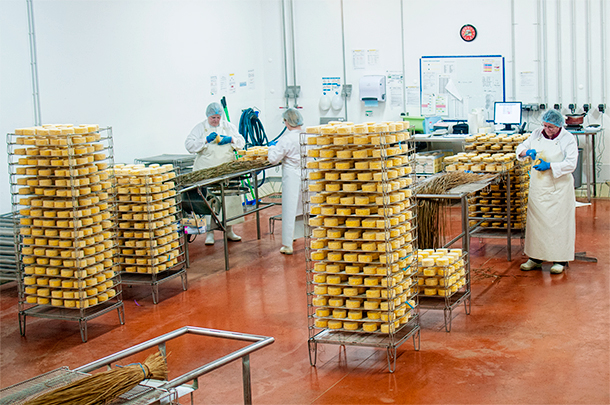 It is possible to tour the Graindorge factory, but, like most places in France, beware the 2 hour closing time at lunch. We arrived a bit earlier than the 14:00 opening hour so hung out in the parking lot. When the visitor centre opened we followed the self-guided tour through the various sections of the factory. At various points in the factory, there were video guides explaining the cheese making process in French with English subtitles. Windows overlooked the factory floor and you could watch people and machines at work. I was surprised by just how much automation goes into making the cheese. There are still a fair number of people involved, but the machines do a lot of the heavier work now. 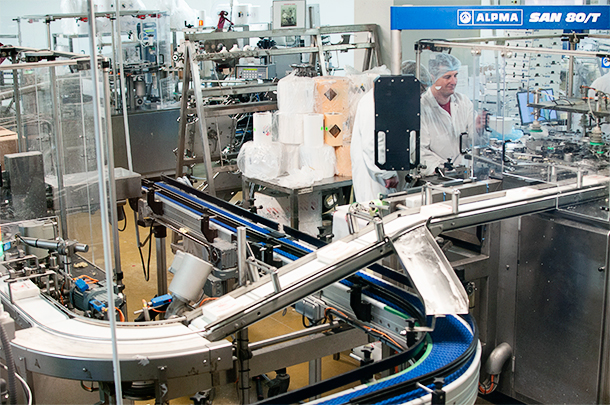 Watching the cheeses be boxed at Graindorge

At the end of the tour, you enter the factory’s boutique where you can sample each of the four cheese made by the company: Camembert, Pont d’Eveque, Livarot, and Neufchatel. We tried them all (of course!) and walked away with one of each, except Camembert which we had already bought at the farm this morning. It was a tasty way to end the tour! Read more about our cheesy day in Normandy on CheeseWeb. 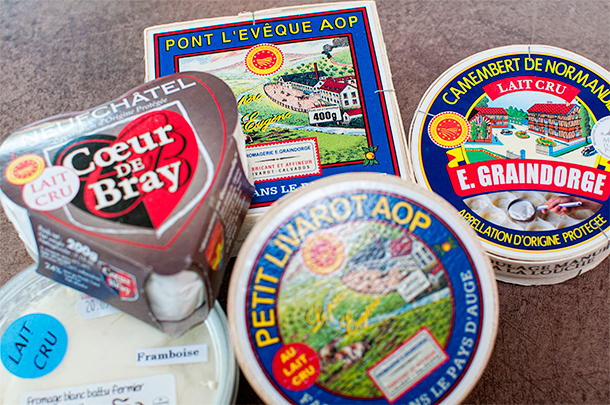 A bit of cheese shopping in Normandy

Heading out of Livarot we stopped at a Dia for a few groceries and fuel. We then made our way up to Caen and around to Douvres-le-Deliverance for our next France Passion stay, this time at an Angora rabbit farm! We pulled into Angora Style and we were greeted by the owner. He set us up on a small road on the other side of his house, overlooking a wheat field. Should be a quiet night, unless those rabbits make a lot of noise. 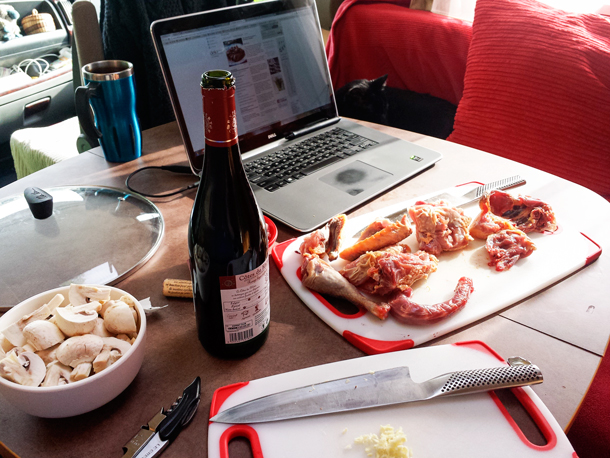 Cooking our first guinea fowl in the motorhome

In other news, I’ve finished up our financial spreadsheet for tracking expenses. I’m now a little concerned we’ve under budgeted for fuel. We’re already above our 250€ budget for the month and it is only May 11th! Obviously, we had an unexpected trip back to Belgium, but that only accounts for an extra tank of fuel. We’ll have to see how the rest of the month goes, but it does feel like we’re going to need more fuel with this bigger engine. Otherwise, we’re doing ok on the budget. We need to start making some money, though! 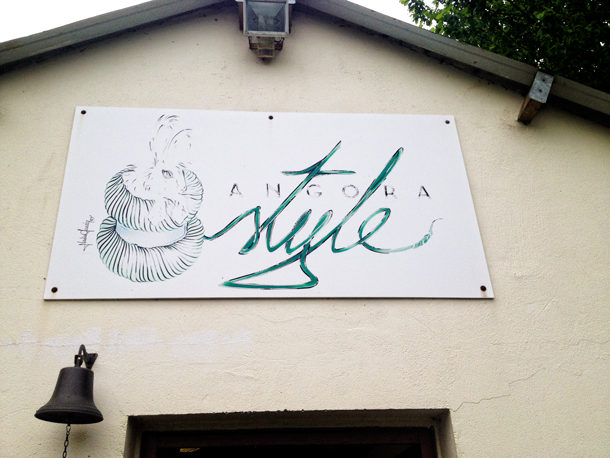 For dinner, Alison made a delicious dinner from the Guinea Fowl we picked up two days ago. Our small space living hasn’t dampened her ambition in the kitchen! It does mean that our main table becomes the prep station when she is making dinner. Thus, when dinner is being prepared everyone has to contribute. There’s no hiding when your life is a 6.5m by 2.5m box!