On our 13th day on the road, we pet some very cute bunnies, learned about Mulberrys, and stood at the top of some pretty steep cliffs. Another great day exploring Normandy, France.

As predicted, our night overlooking the wheat field was quiet. Regardless, we were up early because – bunnies! Our first stop this morning was to visit the Angora rabbits. This is the great part of doing these France Passion farm stays, getting a chance to visit the people and the animals. Of course, sampling the product is always great too! 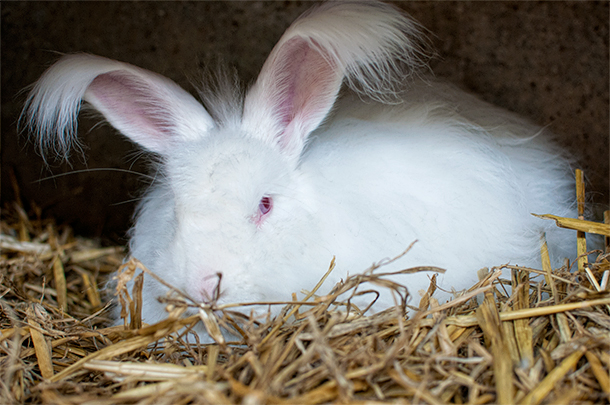 Our host met us outside our motorhome at 9 am and took us into their production shed. It’s not a huge production mainly because of the drop in Angora prices due to competition overseas. Each rabbit has a nice size cage and is cared for obsessively. Since the value is in each rabbit’s fur, they need to be well cared for so their fur doesn’t get ruined. We got a chance to pet some of the rabbits and saw some of the baby bunnies! Floppy easter bunny ears covered in super soft fur. Very cute! 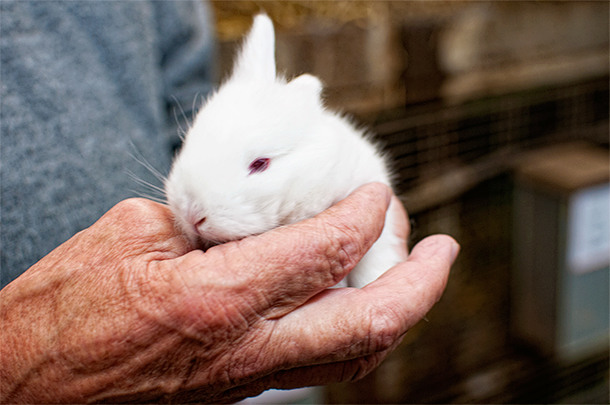 We chatted with the owners and found out it started as a labour of love. The wife loved rabbits and started a business raising Angora rabbits to harvest their fur. The husband started helping out after he retired but with the decline in the value of the fur it became more of a hobby. They still produce Angora for sale, but it is not in the same volume as at their peak. Today, buyers really need to appreciate the quality of French Angora to seek out their product. A rarity, I guess. Before we left, I bought a skein of wool for my mom to use with knitting (cost: €38). 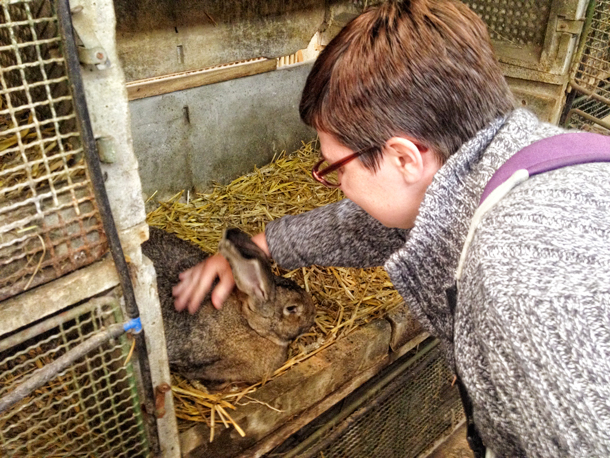 Alison chats with her countryman – a Belgian Giant rabbit

Tour finished, we set out for the Normandy beaches, stopping first at the Canadian cemetery at Beny-sur-mer. It is being beautifully maintained as are all of the graves managed by the Commonwealth War Graves Commission. The number of graves of so many young men is tragic. It’s always sobering to see the number of crosses and think about the lives cut short, the sacrifices made. Lest we forget. 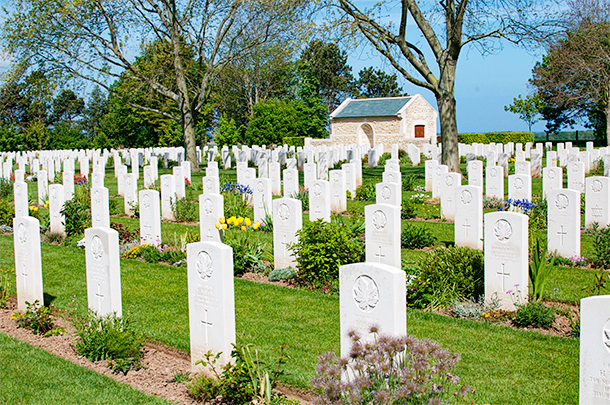 From Beny-sur-mer, we drove to Arromanches to visit the Musee du Debarquement (D-Day Landing Museum). I found the museum as part of my research, but I wasn’t really sure what to expect. Arromanches is the centre of Gold Beach, one of the British landing zones during WWII. It is also one of two beaches where the Allies built temporary harbours, called Mulberrys. For the D-Day landings to succeed, the Allies needed a major port to land troops, vehicles, and supplies. However, none of the landing zones included a major port, so the Allies decided to pre-build the components to a harbour and transported those components across the channel. 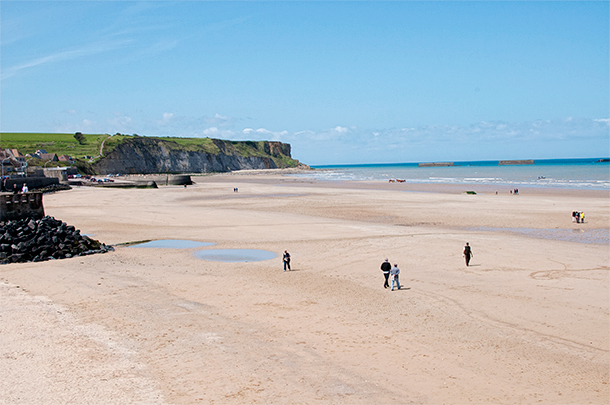 After a quick lunch in the parking lot and moving Amelia to a side parking spot, we walked over to the museum. The Musee du Debarquement isn’t a large museum but it focuses on the Arromanches mulberry harbour. I didn’t realize it would be so focused on that one aspect, but I found the models and explanations of how the harbour worked were very useful. There was a lot of engineering put into building this temporary and portable harbour. I’d read about it but hadn’t considered the scale. Looking at the models, I came to see how much thought had been put into how the harbour would operate, right down to there being a causeway for empty trucks arriving to pick up supplies and another causeway for the trucks to return to shore. I didn’t even think about that. And then to see the sheer scale of the pieces, it was a mammoth undertaking which they then had to tow across the channel! Amazing. 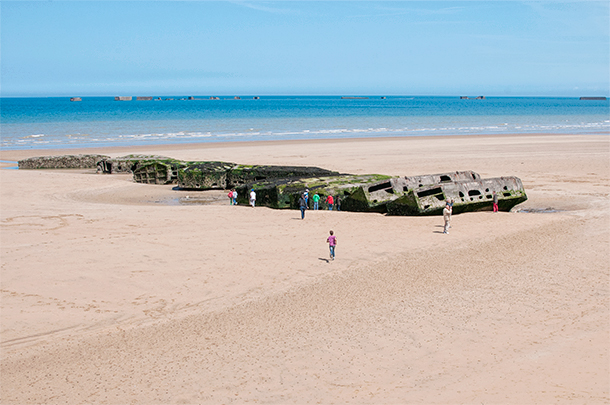 The remains of the mulberry harbour at Arromanches Beach, Normandy, France

Stepping out of the museum, we walked along the beach and checked out the remaining pieces of the mulberry harbour. Quite a few chunks are still there but they are slowly fading away. Incredible that they lasted this long but it would be best to see them before they all disappear.

Back in Amelia, we left Arromanches and drove the coast road past Omaha beach. Our next stop was another D-Day site, Pointe du Hoc, the spot where the US Rangers scaled cliffs to take out a battery of artillery guns. The guns at Pointe du Hoc were powerful enough to fire on the D-Day landing beaches and were deemed a high priority target during the landing. The US Rangers planned to scale the cliffs and take out the guns. In the end, the guns were moved prior to D-Day, but the Rangers found them, destroyed them, and then held their position until other US forces could get to them the next day. 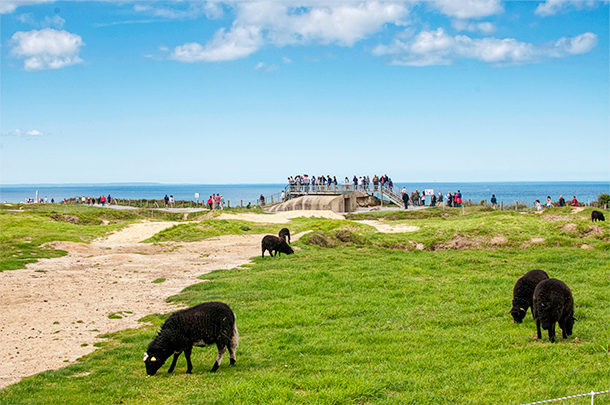 Standing at the top of the cliffs at Pointe du Hoc, walking around the shell craters, we could see just how difficult a challenge the Rangers had. It is one thing to read about it, another to look down those cliffs and wonder why anyone thought it would be a good idea. The landscape is still scarred by the shelling and bombing with sheep out mowing the lawn. The bunkers are interesting but the site lacks information panels. There were three main gun platforms which I overheard were used for antiaircraft. A number of the bunkers were also open for visiting but get there early as the paths in and out get crowded. Oh, and bring a flashlight if you want to explore as some of the bunkers are not lit. 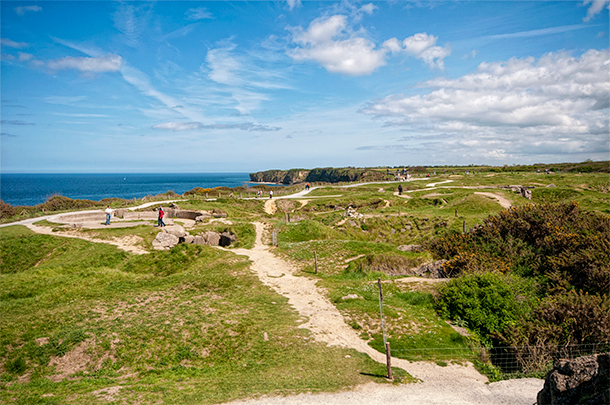 Looking our over the craters at Pointe du Hoc, Normandy, France

We didn’t check out the main welcome center but I do think it would have been worthwhile. I would have really liked a guided tour but that would require some better preparation on my part. Nonetheless, it is a site worth visiting and easy to park a motorhome. I could have easily spent another couple hours just exploring the various bunkers and craters.

If museums and memorials of the Second World War and D-Day landings interest you, you can read more about visiting World War II museums in Normandy on CheeseWeb.

We finished our day in Isigny-sur-mer at our first official campground since May 4th. That’s eight days on the road without a campground. Not bad! Our main reasons for using a campground are laundry and WiFi. Our campground, Le Fanal, is ok but nothing special. The WiFi signal is unfortunately not that strong, so maybe paying €20 for it was not such a great idea. Next time, try the WiFi before shelling out for the full stay.

Since we do have power at our campsite, we settled in for the evening and watched Box Trolls before bed. Cute movie to end a very war filled day.