Day 10 – Plugging the leak and sleeping beside the Seine

The sink is fixed, the WiFi is broken, huge ships passed us on the Seine River, and we bought a Guinea Fowl. Just another day on the road, right?

We awoke to a greyish morning on top of the cliffs in Saint-Jouin-Bruneval. It was a quiet night with a gusting wind sweeping the cliffs. I slept through most of the night but still feel ragged. I love the sound of storms as I go to sleep at night, but ear plugs and eye masks do nothing to block out the rocking of the machine in the wind. It’s one of those things you never really consider when you first start living in a motorhome. 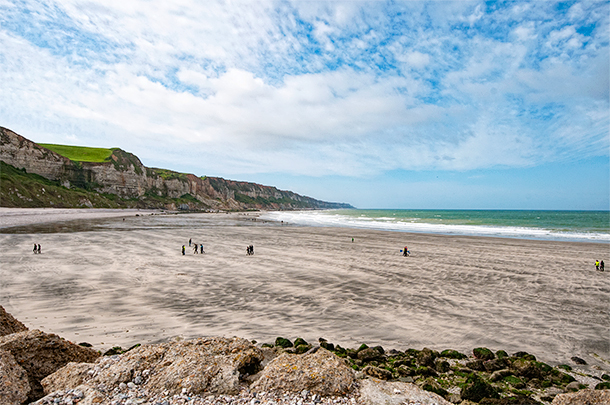 The beach at Saint-Jouin-Bruneval, Normandy, France

While sipping our tea and coffee, we decided to pack up and head out, delaying work until later in the afternoon. There wasn’t much on the agenda for the day, but we did want to get the sink fixed. So we cleaned up, packed up, dumped our tanks again, and set off.

However, dear reader, before going any further, I want to clarify that preparations to get underway are not trivial. It has come as a surprise just how much effort it takes to (properly) clean, pack up, secure our stuff, and get going. It is easy to imagine waking up, enjoying a cup of coffee, turning over the engine, and driving off. However, when the knife you left on the counter becomes airborne, embedding itself in a cupboard, you suddenly realize how important it is to put stuff away. And when a closet door flies open, spilling food or clothes throughout the interior, you put more emphasis on double-checking all the latches. Do you know how much those plastic roof vents cost in a motorhome? Or a side window? You don’t want to find out, so you triple check each from front to back, muttering to yourself, kind of like Rainman. Finally, with two cats, there is litter and fur to contend with. If we don’t vacuum at least once a day our small space can get pretty disgusting. So when I say something as simple as “we packed up”, keep in mind all of the above!

Now back to the day’s story. From the aire, we first followed the road to the bottom of the cliffs to see what was there. Turns out there is a nice new beach at the bottom, next to an oil storage facility. I’m not sure how clean the water is, but so long as nothing is leaking I guess it is fine. The beach provided a nice view of the cliffs and we had a fabulous view of a trio of horses and riders galloping up and down the packed sand. They all looked to be having a fun time splashing through the surf.

After a short walk, we drove towards Le Havre to find a do-it-yourself store with plumbing supplies. We spotted a ‘Bricoman’ sign outside Montvilliers and decided to head there instead of going to Le Havre. We never found the Bricoman but we did find a Leroy Merlin (for North Americans, this is like a Home Depot or Kent). We parked in a back parking lot — again, lots of barriers up to prevent camping cars from entering — and I walked across the business park to the store (obviously no one walks here because there was nary a sidewalk to be found).

Leroy Merlin’s plumbing selection was limited and I didn’t find the part I wanted. Let’s be clear, I am not a plumber. I had narrowed the leak down to a bad seal between the sink’s basin and the drain catch. My first thought was to replace the sink’s entire drain, but the sink/drain combo seems to be something custom built for motorhomes (quel surprise). I did find a rubber gasket in Leroy Merlin which looked like it would fit nicely between the sink’s catch filter and basin itself.  My theory was the rubber would seal against the sink (if I torqued the screw enough) thereby sealing the leak. I also found a drain snake and a laundry hamper. Total cost: €18.03

Back in the motorhome, I tried out my theory and voila! It worked. We tentatively poured some water down the drain without a single leak. Fearing it might be due to hot water, we tried putting some boiling water down it. It held! We were back in business!

Mighty proud of myself for fixing the sink, we set our sights on our next overnight destination, a France Passion site in Heurteauville, across the Seine River from Jumièges. Jumièges is a small town in the Seine-Maritime department and is home to France’s “most beautiful ruin,” Jumièges Abbey. We are planning to visit the abbey tomorrow morning but wanted to be close by so we could be there as soon as it opened. 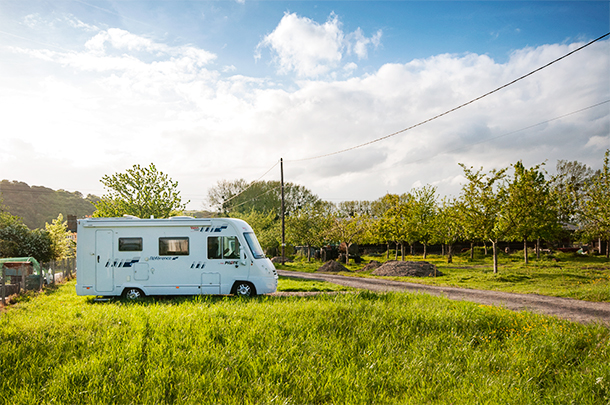 Amelia is all alone for the night on her lovely farm stay.

For the night, we decided to stay at a France Passion site, Ferme Vautier, right on the edge of the Seine River. After parking, we were able to spot the towers of Jumièges Abbey peaking above the trees on the other side of the river. We then took a walk around the farm, owned by Isabelle & Jean-Luc Vautier, who raise chickens, guinea fowl, and cows, and produce milk, cream, cider, honey, and more. We were intrigued by the Guinea Fowl, although we’ve never tried it, let alone cooked it. Nonetheless, we are game to try it (see what I did there?). So we bought a whole Guinea Fowl and some cream from Isabelle who then wished us a pleasant stay. Total cost: €16.08. 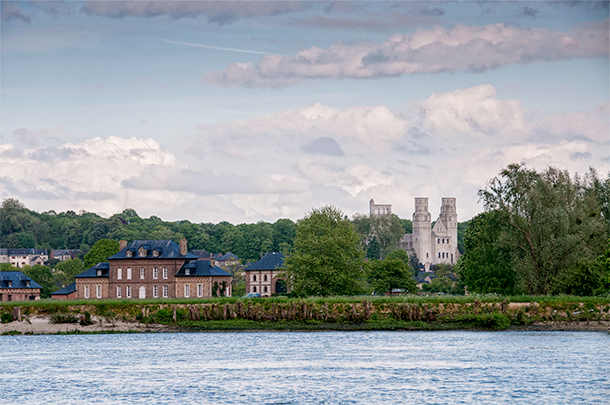 We certainly couldn’t argue with our view for the night. 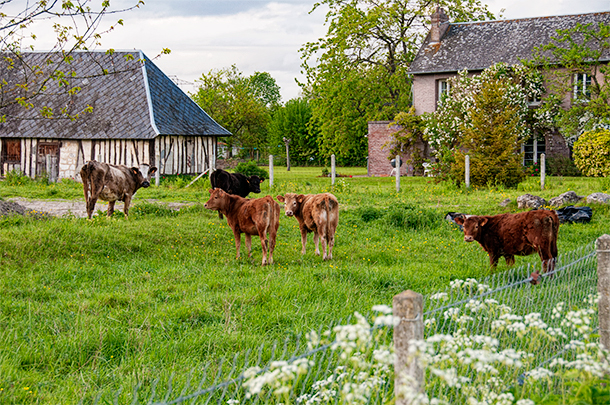 We had fun watching these calves scampering about the farm.

Back in Amelia, we broke out our laptops and got to work. At one point I looked up and cruising down the river was a bloody big boat. It was one of the oddest things to see this far inland. Of course, I knew the Seine was a major shipping lane, but I had never thought about the size of the ships. The barges on the Rhine have nothing on these monsters! They towered above us and took up nearly the entire river. Maybe they were lost and didn’t realize they were on a river? Yikes! 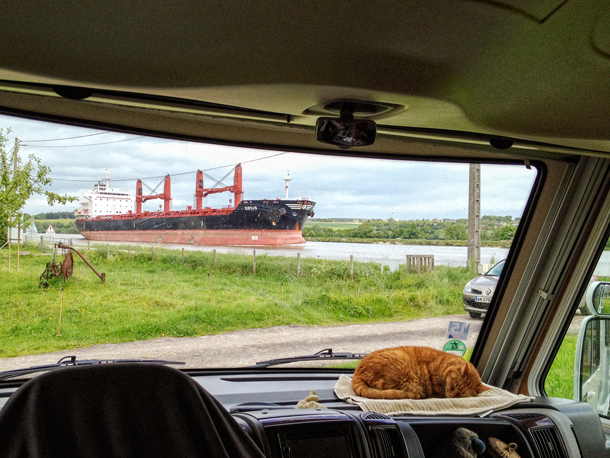 Orange was less than impressed by the giant ships passing by.

After fighting with the MotorhomeWiFi iBoost WiFi extender, I think it is broken. I can’t even access it now, not that it has picked up a single WiFi connection consistently yet! Not sure this was a good purchase. We are back to using the Huawei MiFi again tonight. At least, that’s been a solid purchase so far. (Note: I found out I busted the WiFi Extender by using the reset button. Why is there a great big reset button if you’re not supposed to use it!? Now trying to figure out if I can fix it or it has to be returned to the UK.) (Additional Note: Have to return it to the UK to be re-flashed. *sigh*)

Speaking of WiFi, I discovered that SFR is partnered with FON. FON is a company that offers WiFi access around the world through their partnerships with broadband internet providers. Companies like SFR set up their DSL and Cable modems to share a guest network specifically for FON pass holders. Then SFR and the other broadband internet providers give FON passes to customers who subscribe to particular levels of service. So, if you have service from SFR you can get access to the FON WiFi network anywhere FON has an access point.

I had heard of FON before we left Belgium (I actually worked on a project with them at Belgacom) but I thought you needed to be a subscriber to a broadband provider to get access. When I connected to the SFR-FON WiFi access point, I discovered I could buy a FON pass directly. I can’t buy a pass via FON’s website, but I could buy one via the SFR-FON WiFi access point’s authentication portal. The user experience for this system is beyond painful.

I bought a 30-day FON pass for €29.90, which is cheap compared to the data rates we’re paying on the Orange SIM card. So in theory, we now have access to FON’s WiFi network via SFR and to Orange’s WiFi network thanks to buying an Orange SIM card (although I’m still missing the password for the Orange WiFi, which was supposed to be sent by text message). Not sure if we’ll ever be somewhere we can use these, but I’m hoping WiFi access will become easier. 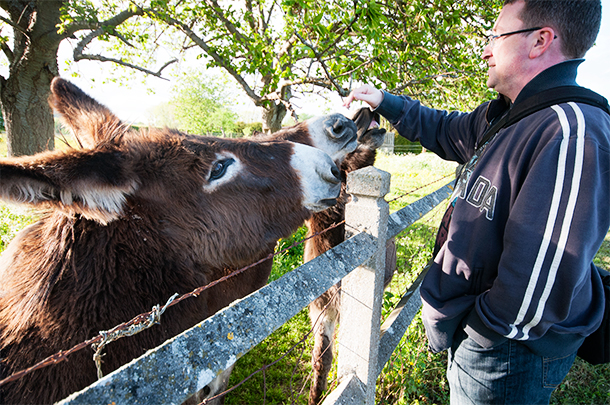 Andrew meets some friendly locals on our walk. 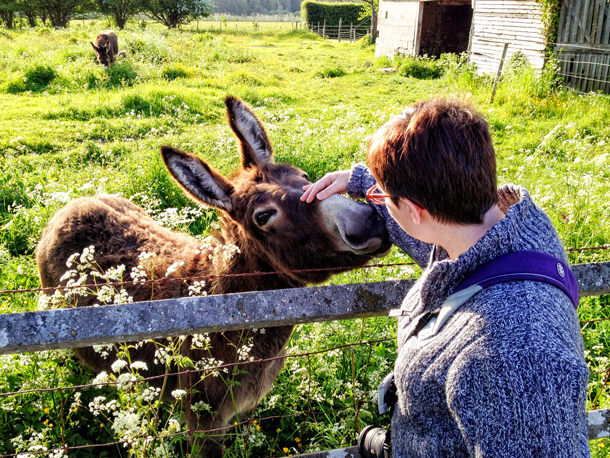 That evening we went for a long walk down to the ferry crossing and back beyond our camping spot. The community is made up of some exquisite gardens created around beautiful old wooden framed houses. I love the topsy-turvy feel to some of the houses. I’m certain our parents would like it here. On many lawns, rabbits seem to have won the battle as numerous generations frolicked and chased each other around without fear. Many properties were fenced (often with barbed wire) which makes me think that livestock sometimes gets loose in the area. Can’t have those pesky cows eating your garden (that’s the job of the rabbits)! 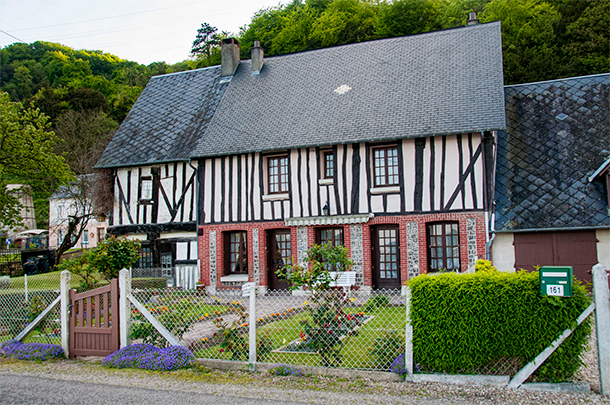 We loved the adorable cottage atmosphere of the village. 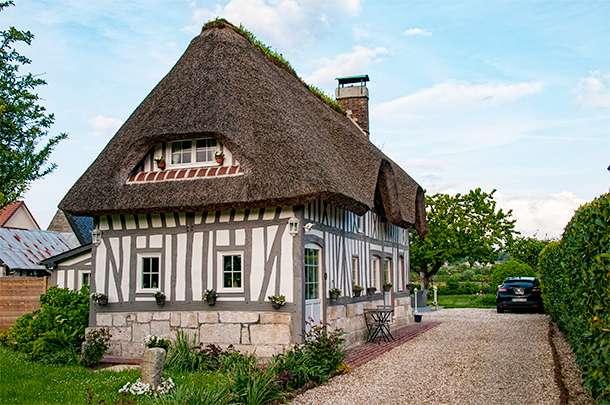 Alison wants to live here when she grows up… 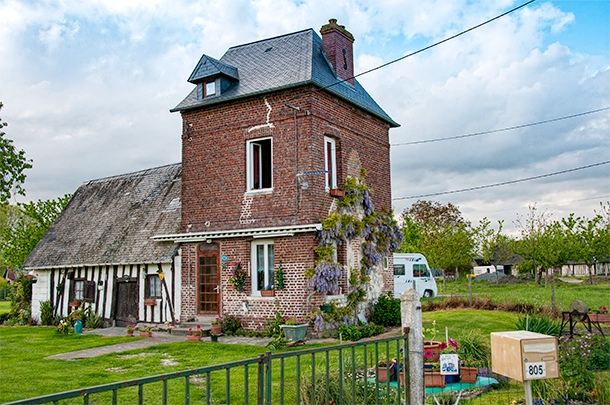 We had to laugh at the house next door. Doesn’t it look like Amelia is parked beside the Weasley’s house?

We returned to Amelia and enjoyed a quiet evening on the farm. Maybe we’ll get the hang of this motorhome life after all.