Home » Everything » We Bought a Motorhome! »

We Bought a Motorhome!

Updates have been sparse but that hasn’t meant we’ve given up on our dream. We’ve bought a motorhome and are planning to hit the road on May 1st!

It has been over a year since our last update but a lot has happened. As you can read from the title, we’ve bought our motorhome! That’s exciting news in and of itself. But how did we get there? That’s a longer story…

After our last update, we really got bogged down in life. Alison got really busy with press events and I was plenty busy with work. We still had our dream, we just didn’t have time to share it on Camper Cats. As 2014 progressed we were getting very close to our goal of being debt free by the end of the year. We weren’t sure our debt would be 100% gone by the end of the year, but it was going to be close.

And then the bomb dropped. At the end of September, I was laid off. Cue sad and scary music. Although it was a kick in the gut at the moment, we recovered quickly. You see, we had a plan. We had prepared a budget for a year of travel and this enabled us to quickly adapt to our new circumstances. In the end we decided to start our adventure a year earlier, setting our start date to be May 1st, 2015.

Moving up the start date was just the beginning. Of course then we had to find a motorhome, get rid of all our possessions, move into our new home, and start a new life on the road. It was a daunting set of challenges to say the least.

Since the fall we’ve gradually been selling off all our possessions. Bit by bit it is going out the door. Not as much as I would want, but it will get there before we leave. Surprisingly, the biggest obstacle has turned out to be submitting our departure notice to our landlords. I really struggled with this until the last day of January, because it meant there was no going back. But it was done and it has put the pressure on us to move things along.

Now we come to the adventure of finding a motorhome. First, because we will be living in the machine full time, we needed a layout that maximized space. In previous years we had visited motorhome shows and we knew roughly the layout we wanted (mainly a layout in which the bed folded up into the ceiling above the driver and passenger seats). We searched the websites of secondhand motorhome dealers in Belgium for models that matched our criteria and created a short list. Then, in early March, we rented a car and set out to view a few of the secondhand motorhomes we had shortlisted.

At our first stop, up near Oostend, we found a motorhome that was the right layout but was quite expensive for the year and the condition. It was a possibility but only if we could talk them down on price. We moved on to the second and third dealers but the motorhomes were not quite what we wanted.

Our fourth stop was Vanomobil in Hoogstraten, where there were two possible motorhomes available. The first, a Frankia, turned out to only seat 3 people while driving and was so heavy that keeping it under the 3500kg maximum weight would have been difficult. The second was a Pilote Reference G630XXL. This model had not been on our radar before but it was exactly what we were looking for, plus it had a solar panel, was an automatic transmission, and was newer than most of the other machines we considered. The downside: it was much more expensive than we had budgeted.

As we left Vanomobil and headed back to Brussels, we talked about our requirements and the machines we had seen during the day. We kept coming back to the Pilote being exactly what we wanted. Other than the price tag, it ticked all of the boxes and then some. Some of the other machines were less expensive, but they were not even close to what we wanted. The closest contender was the first machine we had seen in Oostend (coincidentally, also a Pilote), but it was 5 years older and not much cheaper. If we were going to live in this thing for a year (or more) then it made sense to buy something which fit our requirements and which would last, right?

For the next week or so, we continued to talk about it. The following week, our friend Jon kindly drove us back up to Vanomobil to take a closer look. Unfortunately, as neither of us are mechanical the inspection was not terribly thorough. Nonetheless it reaffirmed our feeling about the machine: it was what we wanted.

Returning to Brussels, we decided to make an offer. After some negotiation, we had a deal. In the words of Bart Simpson and my nephew, “Holy Cow!” We own a motorhome! We’ve made a huge step towards our goal and we can’t wait to get started.

Below is a video we made after buying Amelia, our new-to-us motorhome, along with some photos. She is a 2009 Pilote Reference G630XXL on a Fiat Ducato chassis, she measures 6.49m long, 2.38m wide, and 2.95m tall, and she weighs a svelte 3.1 metric tonnes. We have no idea how we’ll get all our stuff in there, but that is a challenge for another day. For now we have the challenge of licensing, insuring, picking up, and storing our new home. 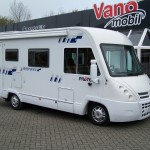 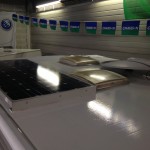 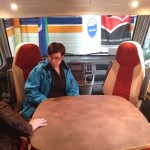 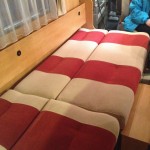 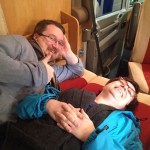 Amelia – Testing out the single bed 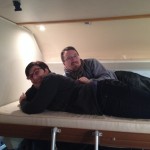 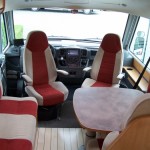 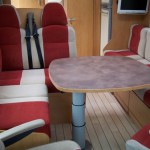 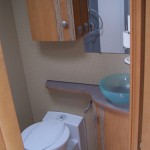 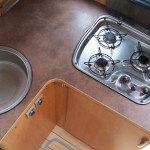