There is something about best laid plans! This update is full of proof plans are always subject to change. Let’s take a look at where we are, three months after our last budget update.

It’s been a busy few months since the last update. I had planned to keep the budget posts to a monthly schedule, but the final months of my MBA at Solvay Brussels put a damper on those ambitions. Now that I’ve finished that journey, hopefully I’ll get back into the swing of things here.

Despite being tied up with my MBA, we actually had a lovely summer in Belgium this year. We didn’t go too far from home, venturing to Paris, Hasselt, Oostende, and Amsterdam for a few days each. Our friends Warren & Betsy did visit, so for a week we enjoyed their company, some great home-cooked food, and drank some nice (but inexpensive) wine.

However, there were also some unexpected expenses that crept in, such as an €900 water bill! This put a real dent in our savings plans. So let’s get at it and take a look month by month. 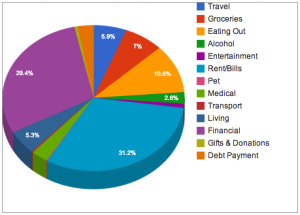 Expenses for July were about the same as for June. The major differences were in Travel, Eating Out, and Living. Travel will always fluctuate depending on opportunities that come up. We’ve set a monthly budget for it and kept to it in July. Eating Out increased as we met with friends to pick their brains for input into my final MBA project. Living also increased due to the summer sales being on and needing to replace some clothing. Despite this, we were able to contribute another €300 to our debt. Nice one! 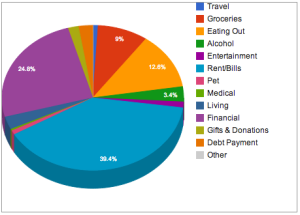 August expenses were a bit more painful thanks to that €900 water bill and much higher spending on Eating Out than budgeted. The big reasons for the increase in Eating Out were our trips to Hasselt and Oostende. Both were locations we were writing about for CheeseWeb and so we spent more on restaurants than we normally do. This is something we’re going to need to watch in future because it does have a big effect on our budget and debt.

Alison also made some great progress on her decluttering project, selling close to €300 worth of stuff. Definitely a lot of progress there. Unfortunately, even with the extra income from decluttering, the net result was the extra spending set us back on our debt by €600. Ouch!

In September, our expenses returned back to where they should be for the most part. The only exception was needing to replace a faucet in our upstairs bathroom. This was offset by getting a chunk of money back from insurance for medical expenses we incurred earlier in the year, so our net result was about on par with July.  Coincidentally, the extra amount paid on the debt amounted to €300 too. Therefore after three months of summer, our debt payment is neutral.

So, all-in-all not great progress towards our goal. It would be easy to blame this on the unexpected, but that will always happen. There are some things to work on regarding our expenses, but it was also great to see that Alison’s decluttering work helped offset some of the extras.

Coming up in October, we have a trip home to visit family in Canada. We’re going to avoid renting a car this time and lean on our wonderful families to get us from A to B (it helps to remember that between A and B are a lot of kilometres!). I’m sure staying within budget will still be a challenge!

Upon our return in November, we will be renewing our focus on decluttering. We will also be exploring new ways to reduce costs and boost secondary income. We will miss MOBICAR, Brussel’s Motorhome Show while we’re away, but we’ll look for other opportunities throughout the winter!

What tips do you have for spending a month with friends/family and staying in budget?  Please share them in the comments below.