Strong wind kept the cats awake, but we persevered and visited Dieppe. After a walk on the beach we headed inland to a farm serving baked goods. Yum!

It was a windy night along the Picardy coast. Amelia took quite a beating from the gusts coming over the dunes, keeping the cats up. At some point Buddy actually pushed his way through the front screen. Wonderful. Something we’ll need to repair. All part of the trial, right?

We had our coffee/tea and then packed up. We serviced Amelia’s tanks, helped out an English couple trying to understand the service stand, and then headed down the road towards Dieppe. On our way, we spotted a Super InterMarche and decided to do a bit of shopping. We picked up some essentials (like tonic) and got back on the road. 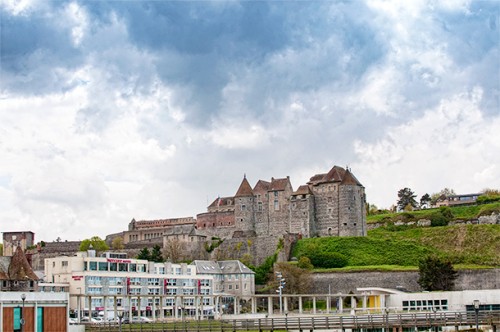 We had no set plans for Dieppe. I was just interested in standing on the beach and seeing it for myself. I’d read a bit about the August 1942 raid at Dieppe and knew it as a failure of epic proportions. Yes, I also know the revisionist view that it was essential learning for the landings in Normandy. I hope there is some truth to those views, but I would challenge anyone who said it was part of the plan!

The raid on Dieppe was a poorly planned attack, with no proper support or preparation. Anyone could see that this would be a devastating failure. The beaches were flanked by cliffs upon which the Germans had their gun emplacements. Any landing would be caught in the cross fire. And with only 7 destroyers for support, it was laughable. But yet the Canadians and their allies proceeded. 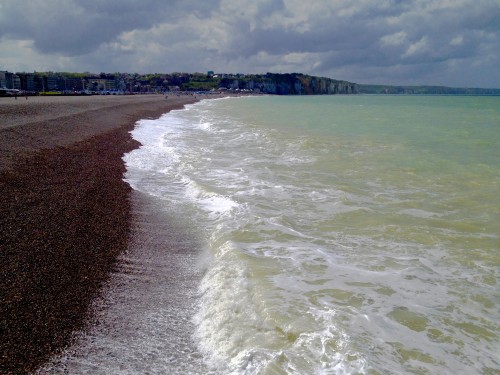 We arrived in Dieppe and quickly found ourself in the parking lot overlooking the beach. Dieppe has reserved a specific section for camping cars, charging 5€ for a minimum of 5 hours. Since we were already there, we forked over the cash and parked Amelia amongst the other motorhomes. We stepped out into the blustery, greyish weather and walked the strand from one end to the other.

During the 1942 raid, this 1.5km stretch of beach was divided into two sections: red and white. The men landing here came under fire from machine guns and heavy artillery, set up on the cliffs. From the centre of the beach I could see how pointless this attack would have been. The artillery was supposed to have been silenced by other units coming ashore on other beaches, to the east and west, but those units were bogged down in their own problems. In the end, it was a bloodbath.

On our return across the beach, we picked up a packet of frites (4.50€) and ate them in Amelia. Unlike other spots I’ve visited, I didn’t have an overwhelming feeling here. At most, Dieppe made me feel angry at the planners who decided this was a good ’test’. But the scars of that raid have mostly faded and it is hard to form a connection. There were some nice memorials along the beach for different units, but overall it felt underwhelming. Perhaps if we had found the Canadian cemetery, I would have felt differently. We were close, as we passed through the town in which it is said to be, but we saw no signs for it. 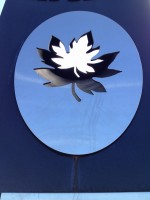 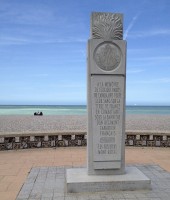 From Dieppe we headed inland to Ferme de Emouville, a France Passion site featuring fresh baked farm goods. We arrived mid-afternoon, bought some mushroom tarts and a rice cake, and then hooked up to do some work. No WiFi in the fields but the MiFi worked well. However, we’re going to go through our 3GB in a hurry! We need to find some decent WiFi soon so we can get some uploads done. 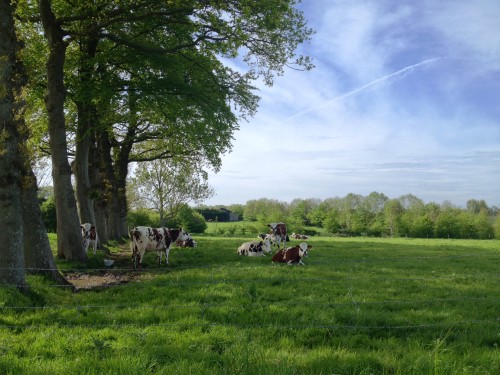 After working through the rest of the afternoon, we ate our mushroom tarts and a salad for dinner. They were delicious and very fresh. We polished off the evening discussing our agenda for our time in Normandy while sipping our first gin & tonics of the trip.

Today was a good day. Let’s hope there are more of these in the future! 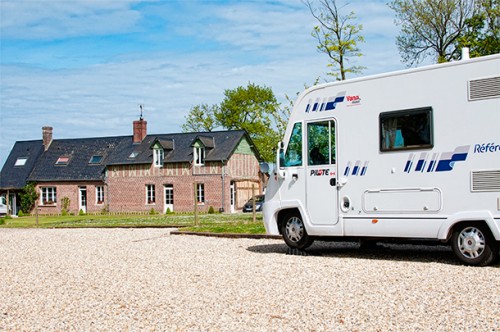