After a quiet night on the farm we drive into Berck to buy a SIM card for mobile Internet. Data connection sorted we head to the coast for a night on the beach.

We woke up this morning and the gas was still working! Hooray! We had our coffee and tea, then paid a quick visit to Les Vergers farm shop. We bought 3 bottles of apple juice (apple, apple-pear, apple-raspberry), a bottle of cider, and two types of cheese (mimmolette and a tom soaked in cider). Total price: €17.93.

Our primary goal for the day was to pick up a SIM card for data. I had the address for an Orange boutique, in Berck, so we headed for the coast, following scenic (“green”) roads through the country side. This part of France is absolutely lovely, with lots of rolling hills. It’s very green this time of year as well. 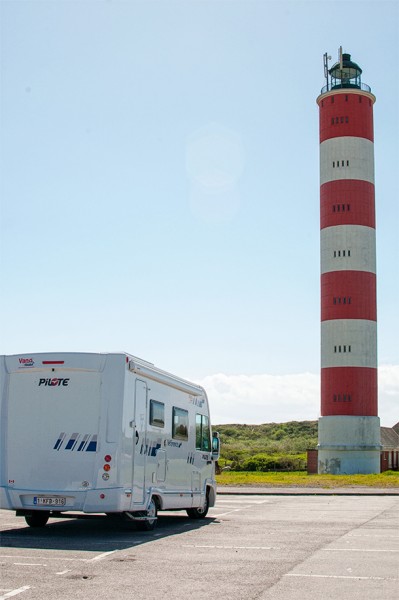 The lighthouse in Berck, France.

Berck is a medium-sized town on the French coastline but it was fairly quiet for a Wednesday morning. We parked near a lighthouse to eat our lunch (bread, cheese, apple juice). After lunch we drove towards the Orange Boutique but found it was on a very narrow, almost pedestrianized shopping street. We pulled into a parking lot near the beach, next to some other motorhomes. From the beach, I walked back to the shop and got in line.

After about 10 minutes I pulled out my phone and saw some frantic messages from Alison. Apparently we weren’t supposed to park near the beach (only for vehicles <2.2m) and the police were handing out tickets. Alison managed to buy us a few minutes, so I rushed back and we moved Amelia back to the parking lot near the lighthouse. The signs at the lighthouse parking lot still said it was only for vehicles less than 2.2m but we decided to risk it anyway since it was so empty. I quickly walked back into the shopping area and returned to the Orange Boutique.

Fifteen minutes later, I finally got to speak to someone. After describing my need for a data-only SIM card, I was told the only option for someone without a French bank account is a rechargeable card. If you have a French bank account you have a number of options at more-or-less reasonable prices. For people without a French bank account, the price is 35€ for 3GB. Ouch! I bought the SIM card anyway as we needed something. On my way back to Amelia, I stopped at an SFR shop but learned the same story (although it was 4GB instead of 3GB, but SFR doesn’t have as much coverage). On the upside, it seems having this SIM also entitles us to use the Orange WiFi spots. We’ll have to see how prevalent they are.

SIM card in hand, we headed out of Berck following more green roads along a picturesque bay and through a marsh. It was a lovely drive despite a strong wind. We were heading to an aire between Le Hourdel and Cayeux-sur-mer. We found it across the road from a campground, tucked in behind the dunes. Since we’re in the off season, the aire was mostly empty. We parked Amelia parallel to the back rail of the lot, with the wind to our rear. Normally we would have had to back into the spot, but as it was empty and the wind so strong, we figured it wasn’t going to be a problem. We levelled Amelia as best we could and I went across the road, to the campground, to pay. Total cost 10€ (7€ for the night and 3€ token to use their services). 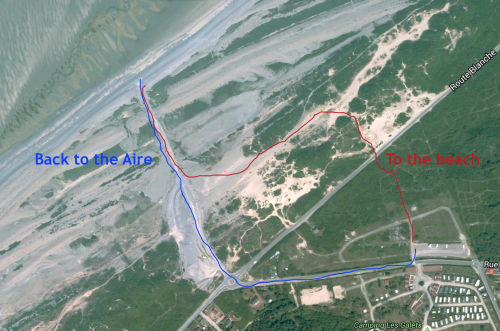 Our walk across the dunes in Cayeux-sur-Mer.

Upon my return, we walked over the dunes and down to the beach. Boy, walking over the dunes was a work out! On the other side, the wind had the water in full broil. There were kite surfers along the water’s edge, so we walked down to take a look. Crossing the rocks to get to the beach was also a chore. All the stones were rounded and rolled under your feet; hard to walk on. The stones also included a mix of agate and amber. 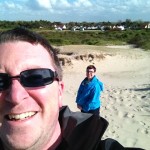 Hiking the dunes in Cayeux-sur-Mer 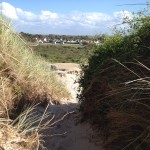 Looking back to Amelia from the top of the dunes. 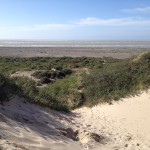 A view of the channel from the top of the dunes. 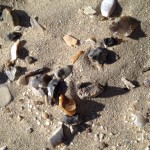 Agate and amber all along the beach. 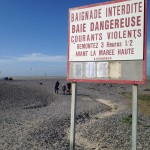 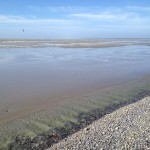 Off in the distance you can just see the kite surfers.

After taking some photos, we walked back to Amelia, taking the hard packed ‘road’ that had been built, rather than clambering over the dunes. We tried connecting to the internet using the campground’s WiFi, but we needed to buy access and the front desk had just closed. So I set up our Huawei E5577 MiFi (or Huawei E5577 on Amazon US) and our new Orange SIM card, but we couldn’t get a great connection. For dinner we reheated the left over pasta and sausage, enjoyed some cider and other drinks, and then watched Dracula.

Happy 15th Anniversary to us! 🙂